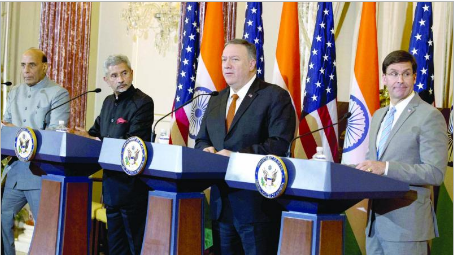 The second round of the “2 plus 2” dialogue between India and the United States — involving the foreign and defence ministers of the two countries — which concluded in Washington last week — appears to give us a new paradigm, that in India-US relations two plus two is on a trajectory to becoming six.

The press statement of the ministry of external affairs, issued a day after the 2 plus 2 engagement of December 18, is a transcript of the statements of US secretary of state Mike Pompeo, US defence secretary Mark Esper, minister for external affairs S. Jaishankar and defence minister Rajnath Singh to the media in Washington.

It was followed by a brief question and answer session.

It is possibly the clearest enunciation that the Narendra Modi government is seeking the kind of engagement with the US that India had developed with the USSR in the bipolar, Cold War era.

The Indo-Soviet Treaty of Peace and Friendship, a bilateral security agreement struck in the wake of US nuclear capable warship, Enterprise, moving into the Bay of Bengal to threaten India as Pakistan was losing its eastern wing to form Bangladesh, had been signed in one shot.

India’s shiny new deal with the United States is analogous, not identical, and has been a stage-by-stage affair in which rapid, decisive strides were taken by the present government, with the compass fixed firmly in one direction.

The recent dialogue in Washington seems the first firm intimation that New Delhi will not be held back from embracing Washington in a wide-arc politico-military alliance in a manner that may suggest a Nato-member like newfound status (in the Indo-Pacific theatre) for India.
Plainly, India will be the inferior ally; America the superior, commanding global strategic partner.

India being drawn into the US embrace has a context — the American tilt to the Pacific and its search for allies there, as its interest in Nato declines with its new-found non-reliance on energy sources in West Asia, and its concomitant emerging interest in containing China rises.


In addition to Japan and Australia, India is the partner in this venture in the “Indo-Pacific”, the new US coinage for the Pacific area.

The Modi government has evidently found the opportunity irresistible, given India’s frictions with China besides other considerations. In last week’s dialogue in Washington, Mr Pompeo suggests that the two countries had practical discussions on not just bilateral matters but on Iran, China, Afghanistan and Pakistan, besides Nepal and Sri Lanka.

It was the over-arching, across-the-board nature of the political conversation that was striking. His Indian counterpart did not get into specifics, perhaps bearing in mind sensitivities back home.

However, the points made by our defence minister were revealing. It appears now the Indians will be posting a liaison officer with the American naval base in Bahrain, from where the Americans militarily oversee the Gulf area.

There is to be a link between our naval headquarters and the US Indo-Pacific Command.
Senior-level participation in deliberations with the Indian military has been solicited from the US CentCom and AfriCom (Central Command and Africa Command). We are on the cusp of a new era.