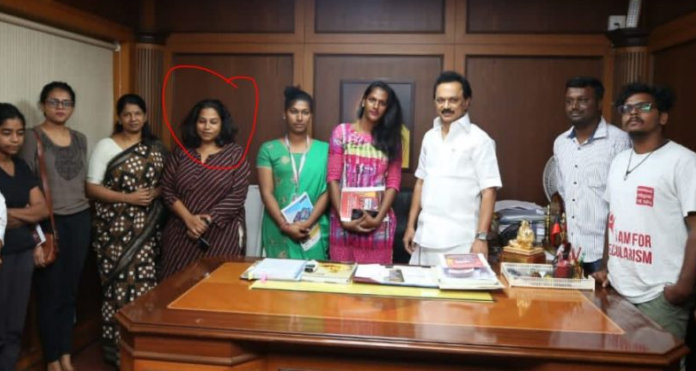 The Chennai police is now investigating the alleged links of CAA anti-Kolam (Rangoli) protesters with Pakistan. City police commissioner AK Vishwanathan said, “We are investigating the link between a lady and her Pakistani connection, but cannot tell anything right now.”

On Saturday, 6-7 women were detained in Basant Nagar area on charges of making anti-CAA KOLAM, however they were released later. Chennai’s Commissioner of Police AK Vishwanathan on Wednesday said that one of the protesters who was detained by police during the Kolam protest might have ties with certain Pakistani organisation.

The incident in Chennai took a new look on Wednesday when Police Commissioner Dr. AK Vishwanathan made a statement about a detained protester that he may have links with some Pakistani organizations. The police commissioner also said that the protesters were not detained for making KOLAMs, but rather they forced a person to join protest who did not want to join their kolam campaign.

Police commissioner AK Vishwanathan said, ‘The Facebook profile of Gayatri Khandhadai (a female protester), one of the protesters, shows that she is a researcher in the Pakistani organization ‘Bytes for All’. This organization belongs to Pakistan Citizen Journalist. They are also in contact with some organisations here.

A tweet of ‘Bytes for All, PK’ said that Ms Gayatri Khandhadai had taken part in an Asia Forum For Human Rights and Development meeting.

Currently, Chennai Police is investigating Pakistani connection of Gayatri Khandhadai. On the other hand, DMK has supported the Kolam campaign. MK Stalin and Kanimozhi met protesters who were detained by the police.

In Tamil Nadu, Kolam is depicted outside the homes of Hindus as a symbol of prosperity. Kolam is made from rice & flour, so that ants can eat it.

Generals to meet again to chart out troop reduction – Defence...