As Biden waits in wings, Pakistan takes a preemptive swipe at India – Defence News of India 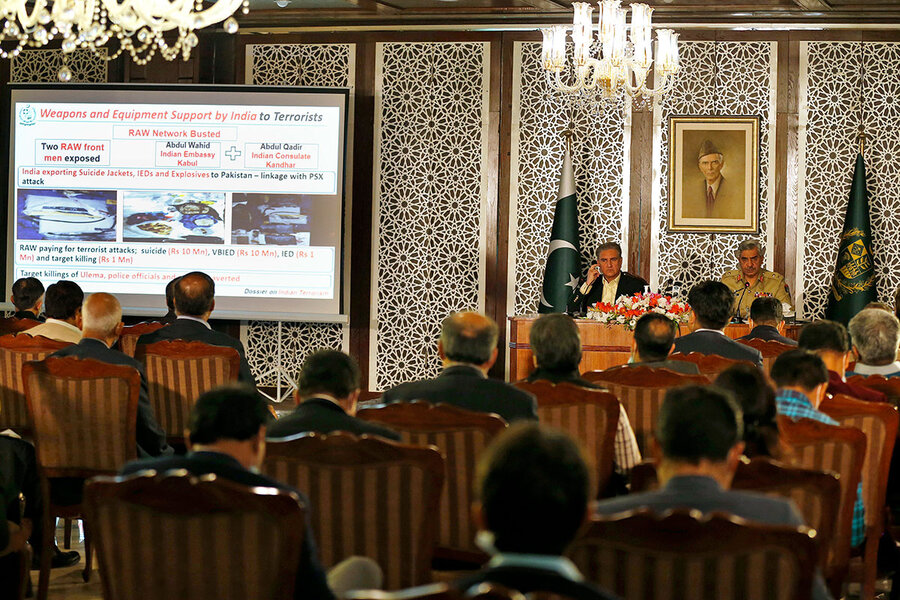 Nuclear arch-rivals India and Pakistan have for decades sought to score knockouts against each other on the international stage, trading accusations of terrorism and destabilization.

So, when Pakistan’s foreign minister and the military’s public relations chief recently presented world powers with a thick dossier of alleged Indian-sponsored terrorist activities on Pakistani soil, the initiative was not seen as totally new, though its level of detail – names of accused Indian agents, audio wiretaps, money transfers – was unusual.

What did raise questions was the timing – why now?

In the eyes of some regional experts, it was simply a case of the pot calling the kettle black. India has for years accused Pakistan, and offered proof, of harboring terrorist groups and coordinating their attacks inside India.

Crucially, the dossier, which was also shared with United Nations Secretary General Antonio Guterres, comes as India prepares to take a rotating two-year seat on the U.N. Security Council in January. And it’s also squarely aimed at the incoming administration of President-elect Joe Biden, a not-so subtle message that India may not be a reliable security partner and democratic exemplar.

Pakistan’s campaign comes as India has bulked up its international profile, emerging over the past decade as an ever-closer security partner of the U.S. and becoming something of an Asian democratic counterweight to Communist-ruled China. At the same time, Pakistan has seen its importance to the U.S. and other powers diminish as the U.S. winds down its presence in Afghanistan.

“It’s no surprise Pakistan would be coming out with such a dossier, especially as India is about to take a seat again on the Security Council,” says Karl Inderfurth, an assistant secretary of state for South Asian affairs during the Clinton administration. “Pakistan has watched from the sidelines as India has only grown in regional importance, so I see them acting to remind the powers on the council that one of their partners has a history of stirring up trouble in the region.”

India has successfully painted itself as the innocent target of terrorism, says Pakistan’s ambassador to Washington, Asad Khan. But it is time the world understood not just India’s destabilizing activities in the region but also its attacks on democratic governance and human rights at home under the current Hindu nationalist government, he adds.

“A certain narrative has been built around Indian victimhood – how India has suffered at the hand of terrorists – and much of that blame has been thrown at us,” Ambassador Khan says.

“Indian fingerprints”
In an interview with the Monitor over Pakistani tea, Ambassador Khan noted that his country has successfully brought down the number of terrorist attacks inside Pakistan over the last decade and wrested control of large parts of the country from non-state actors.

But over the last two years Pakistan has faced a resurgence of attacks and “unfortunately we see the Indian footprint and Indian fingerprints all over the place,” he says.

India has dismissed Pakistan’s claims as lies and repurposed accusations from the past aimed at diverting attention from Pakistan’s own failings.

Pakistan and its dossier “enjoy no credibility,” India’s permanent representative to the U.N., T.S. Tirumurti, said in a tweet. The Indian mission to the U.N. in New York said in a statement that Pakistan “cannot change the fact that they are the epicentre of terrorism.”

As the two rivals toss accusations back and forth, the reality is that India has broadly seen its star rise in global affairs as Pakistan’s has languished. U.S.-India relations have been on an upward trajectory for two decades, with the Trump administration’s renaming of the Pacific Command to the Indo-Pacific Command in 2018 just one tip of the cap to India’s growing strategic importance.

Another key player is China, which has a growing economic footprint in Pakistan but tense relations with New Delhi that include a longstanding border dispute that flared again this summer.

Indeed Pakistani officials accuse India in their dossier of trying to destabilize Pakistan’s economic cooperation with China by fomenting terrorist attacks against Chinese-financed development projects, including a deadly assault at a luxury hotel in Gwadar, a port city in southwestern Pakistan.

“We see the U.S. as perhaps the only country in the world that is in a position to play an important and critical role on this issue,” says Ambassador Khan. “We are hopeful the engagement of the U.S. could work to support peace and security for our region.”

In particular, Pakistan would like to see the U.S. pressure India over its revocation last year of the disputed Kashmir region’s autonomous status and the repressive measures Prime Minister Narendra Modi continues to enforce there.

But most regional experts are skeptical that the Biden administration will rush to take Pakistan’s side and prioritize human rights over security ties with Mr. Modi’s government.

“We may see the U.S. taking a little tougher stance toward India over its human rights record, but basically we’ll continue to court India as a counterweight to China,” says James Dobbins, who served as a special representative for Afghanistan and Pakistan in the Obama White House. “And overall I don’t think we’ll see the Biden administration taking a very different approach to Pakistan than the Trump administration did.”

Allegations of Indian support for separatists in the Balochistan region might indeed have merit, says Mr. Dobbins, a senior fellow at the Rand Corp., since India has been suspected of such activity in the past. But Washington is more concerned about Pakistan’s influence in Afghanistan and with the Afghan Taliban, as it tries to wind down its longest war and implement a fragile peace plan struck by the Trump administration. Mr. Dobbins says he’s pessimistic that Pakistan will use its influence over the Taliban to support this plan.

Fear of encirclement
The reason goes back to India.

Pakistan’s overriding concern is that an increasingly powerful India would become an influential power in postwar Afghanistan. That in turn could lead to a dreaded “encirclement” of Pakistan by its chief adversary, says Mr. Inderfurth, a professor of international relations at George Washington University.

“I imagine Pakistan is as anxious as everyone else to see how a Biden administration will re-engage with the international community, and in particular with South Asia, and I’m not surprised if [the Pakistanis] are trying to influence those relations out of the blocks,” he says, referring to Pakistan’s dossier of accusations.

But like Mr. Dobbins, Mr. Inderfurth says the U.S. interest in resolving the war in Afghanistan is likely to mean just as troubled relations with Pakistan as in the past.

“Biden and the new national security team he’s bringing in have a long history of dealings with Pakistan, particularly over the eight years of the Obama administration,” he says. “And suffice it to say, those years did not go very well.”