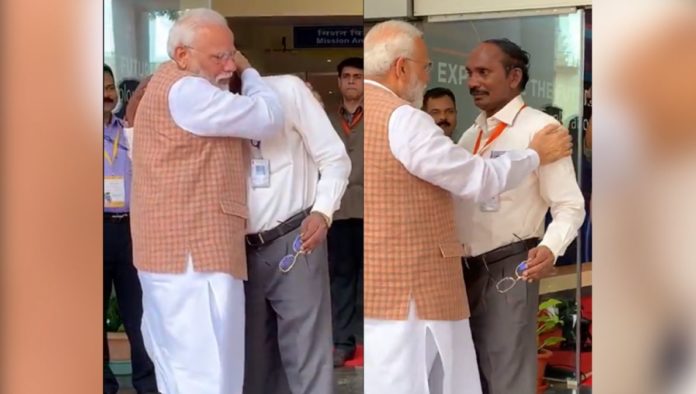 The visuals of the moment, widely shared on social media, showed PM Modi hugging and patting Mr Sivan as he broke down at the ISRO headquarters in Bengaluru.

“When I was emotional, the honorable Prime Minister hugged me. He understood what really happened in my mind. He showed leadership. The hug taught me many lessons. It was great thing that the prime minister himself consoled me. That gave us a big relief,” K Sivan told NDTV in an exclusive interview.

“It gave us another motivation that we should do more. That is the feeling I had. We are working with more vigor now than we had, to achieve more and more in the space system,” the ISRO chairman said.

Chandrayaan 2, the first expedition by ISRO to attempt a soft landing on the lunar surface with home-grown technology, was India’s third mission to a celestial body.

Lunar lander Vikram was scheduled to soft land near the south pole of the moon after a 3.84 lakh km journey that began at the Sriharikota base in Andhra Pradesh on July 22. PM Modi had flown down to Bengaluru on the night of September 6 to watch the planned touchdown of the Vikram lander. But in the early hours of the September 7, moments before it was expected to land, ISRO lost contact with Vikram, just 2.1 kilometres above the lunar surface.

India hoped to become the fourth country in the world to successfully execute a soft landing on the lunar surface, and the first on the lunar south pole. Hours after the space agency confirmed that contact with the lunar lander was lost, PM Modi addressed ISRO scientists and praised their “resilience and tenacity”.

After his speech, the prime minister hugged Mr Sivan outside the space centre in a gesture that was appreciated by many, including several political leaders.

The space agency announced on Wednesday that Chandrayaan-3, India’s third mission to the moon, has been approved by the government. ISRO will aim for a launch by 2021, Mr Sivan said. The existing orbiter will be used of the mission and a new launch site has been selected, he said.