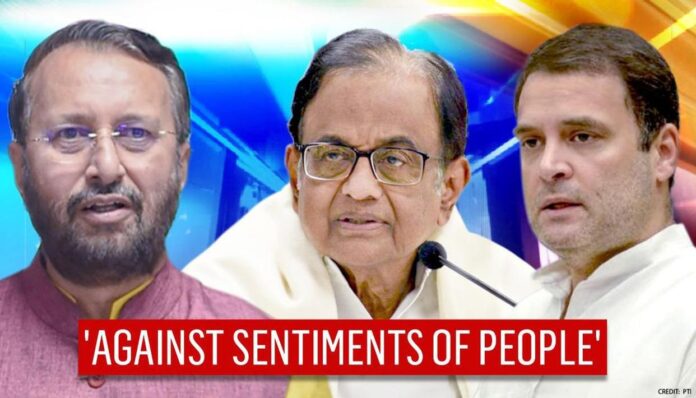 Addressing the media on Saturday, Union I&B Minister Prakash Javadekar dared Congress to include the restoration of Article 370 as a promise in the Bihar polls manifesto. He was referring to senior Congress leader P Chidambaram’s statement on Friday where he called for the people of Jammu and Kashmir to be given back their rights that existed before August 5, 2019. According to Javadekar, Congress knew very well that the people of the entire country had endorsed the decision to scrap J&K’s special status.

Alleging that Congress was endorsing the agenda of soft separatists, he lamented that the opposition party repeatedly went against the mood of the people. Moreover, the Union Minister accused the Sonia Gandhi-led party of praising China and Pakistan. Maintaining that Article 370 was always temporary in nature, Javadekar listed the various benefits secured by the people of J&K and Ladakh in the last one year.

Union Minister Prakash Javadekar remarked, “Congress leaders P Chidambaram and Digvijaya Singh are saying that the decision to abrogate Article 370 was wrong and so, Congress will take it back. Can the Congress include this in the Bihar poll manifesto? They know very well that the people of Jammu, Kashmir, Ladakh and the rest of the country welcomed the move to abrogate Article 370. They have seen the kind of progress in Jammu and Kashmir and Ladakh in the past one year. But Congress is echoing the language of the soft separatists.”

“Congress is continuously adopting positions that go against the sentiments of the people of this country. Rahul Gandhi also praises Pakistan. They like to praise Pakistan and China on any issue. The Constitution also stated that Article 370 is for a limited period, after which it will go. Separatism has ended and all the vulnerable sections of the society got the benefit of reservation. Many welfare laws were implemented in Kashmir,” he added.

New alliance in J&K
All original Gupkar Declaration signatories barring for J&K Congress chief GA Mir came together for the first time on Thursday since the abrogation of Article 370. The Gupkar Declaration was a resolution passed by NC, PDP, Congress, CPI(M), JKPC and ANC on August 4, 2019, pledging to protect the “identity, autonomy and special status” of J&K. Addressing the media after the meeting, NC president Farooq Abdullah announced the formation of the People’s Alliance for Gupkar Declaration’ and called for the restoration of J&K’s special status.