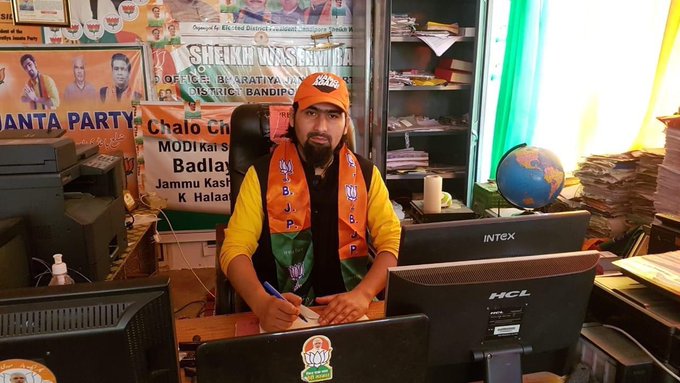 THREE members of a family, all linked to the BJP, were killed in a militant attack on Wednesday evening in North Kashmir’s Bandipore, leading to the arrest of their entire security detail. The dead included a member of the BJP state executive committee, Sheikh Waseem Bari, 27, and his father Sheikh Bashir Ahmad and brother Sheikh Umar, who were also office-bearers of the party.

The high-profile killings in a fortified zone came as a shock for the security establishment, especially as Bandipore has been relatively calm in recent years.

Bari had been associated with the BJP for more than four years and was earlier president of the party’s Bandipore district unit. Kashmir IGP Vijay Kumar said the three were shot by some unidentified men. “They were critically injured and succumbed later.”

Union Minister Jitendra Singh tweeted that Prime Minister Narendra Modi enquired about the killing and offered his condolences to the family.

In a late-night statement, the J&K Police said, “Ten policemen were deployed for his (Bari’s) security but none was kept along by him at the time of incident… Officers continue to work to establish the full circumstances of this terror crime besides why he was without any security… The men deployed for his security are being detained for negligence under (the) police Act.”

Bari had joined the BJP after unsuccessfully contesting the 2014 Assembly elections as an Independent, and emerged as a prominent face of the party in Bandipore.

“It is a big loss for the party. It is an attack on nationalist thought and those behind it are frustrated. His brother was coordinator for the BJP’s youth wing in Kashmir province,” BJP national vice-president (Youth Wing) Er Aijaz Hussain told The Indian Express, adding the party won’t be deterred by such incidents and would continue its work.

BJP president J P Nadda said the sacrifice of Bari and his family “will not go in vain”. BJP national general secretary and the party’s point man for the state Ram Madhav tweeted, “Shocked and saddened by d killing of young BJP leader Wasim Bari and his brother by terrorists.”

Former J&K chief minister Omar Abdullah and Congress state president Ghulam Ahmad Mir were among the leaders who expressed shock at the killing. Jammu and Kashmir Apni Party’s Altaf Bukhari said that “such incidents are downright appalling and disturbing.