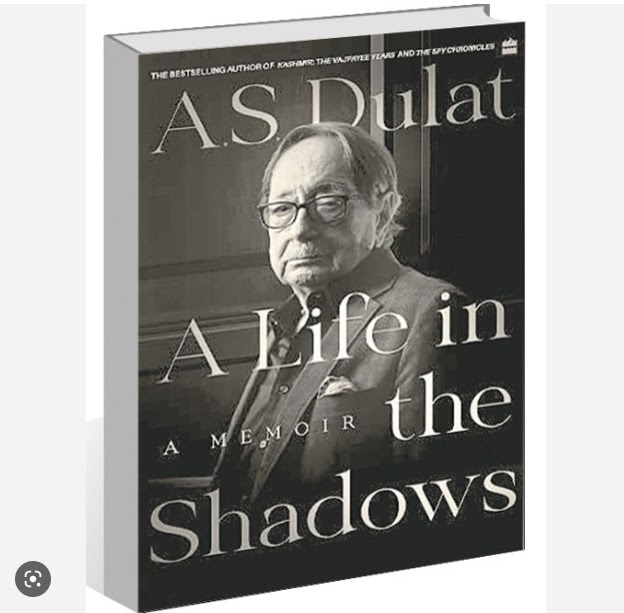 Author: A life in the shadows: Memoirs

In countries like India, where archives remain classified and inaccessible for years or even decades; the memoirs, biographies and autobiographies of decision makers are often the only window into important events. Such publications must therefore be welcome, especially when the author was the country’s top spy – the head of the Research and Analysis (R&AW) wing – at an important time; and an Intelligence Bureau officer for three decades before that. Honing Mr. Dulat’s professional outlook is a wicked sense of humor, which pervades his writing.

This is Mr. Dulat’s third book. The first, “The Vajpayee Years” was published in 2015 and the second, co-authored in 2018 with Asad Durrani, the former director general of Pakistan’s Inter-Services Intelligence (ISI), was the most readable: ” The Spy Chronicles: R&AW, ISI and the Illusion of Peace”.

Mr. Dulat is no ordinary ghostwriter. In a country full of self-proclaimed experts from Kashmir and Pakistan, he can truly claim to be one. In 2000, after his retirement from the post of head of R&AW, he was recalled to service as special adviser to Prime Minister Atal Behari Vajpayee on Kashmir. During this five-year period, Mr. Dulat expanded into Kashmir, holding informal talks with separatist leaders and militant commanders, and building the trust that ultimately lifted Kashmir from the bloody era of conflict. from Kargil in 1999 to the Line of Control (LoC) ceasefire that Prime Minister Vajpayee proposed in Pakistan in 2003, leading to a period of lasting peace.

In describing these turbulent years, Mr. Dulat does not hide his affection for the Kashmiri people. Over the past three decades of insurgency, many Kashmiris have accused “India” (since they do not view the state as Indian) of only wanting the land of Kashmir, while considering its people as an unnecessary nuisance. The author, on the other hand, flaunts his close relationship with Kashmiri of all persuasions, from the man on the street to leaders such as Farooq Abdullah, whom Mr. Dulat regards as an Indian patriot. New Delhi, the author argues, missed the opportunity offered by Farooq and his considerable political influence in the valley.

Mr. Dulat seems to believe that, while acting as a special adviser to the Prime Minister, it was enough to establish close relations with the main political parties such as the National Conference and the People’s Democratic Party, and their leaders like the Abdullahs and the muftis; and, to a lesser extent, with so-called “soft separatists” like Shabir Shah. Mr. Dulat is dismissive of the most influential separatist leaders, Syed Ali Shah Geelani and Yasin Malik, who both commanded many supporters in the valley; and without whom no peace agreement could have remained. One wonders if the scant regard Mr. Dulat is giving to hardline separatists is due to the Abdul Majeed Dar debacle. Mr. Dar, who was the commander-in-chief of the Hizbul Mujahideen (HM) in Jammu and Kashmir, was negotiating to lay down the gun and return to the mainstream with a large number of HM cadres. However, New Delhi was too slow to react and HM fighters who remained loyal to Pakistan were incited by the ISI to frustrate the plan. An HM batting team shot down Mr Dar in 2003, dealing a blow to New Delhi’s influence in the valley.

The book begins with a description of Mr. Dulat’s family and his school and college days in the easy-paced 1950s and 1960s. Eventually he joined the police and early in his career avoided the IB. One of the book’s most interesting chapters, entitled “Wilderness of Mirrors”, describes the confusing and deceptive world in which intelligence agencies operate, at the heart of which “there is fraud, double-dealing and cold dealings. , even if and when everything is done with a smile. The author provocatively asks the question: which country has the best intelligence service? Responding himself, he said: “I would say that we are quite good, better than the ISI, with whom we are constantly compared as professionals. As much was conceded even by my friend, former ISI chief General Asad Durrani.

Another enjoyable chapter in the book describes the author’s dealings with various characters the author has had the privilege of dealing with. These include Ashwini Kumar (“a legend and an inspiration”), Yasser Arafat (“No tunes and graces”), Prince Charles (“gave me a pair of cufflinks”), Margaret Thatcher (“There’s something about the Brits”) and Lee Kuan Yew (“a leader who shaped history”). There are also well-written descriptions of people the author considered close friends: Rajesh Pilot, Madhavrao Scindia, Giani Zail Singh, and Farooq Abdullah, who notes an entire chapter. Also held in high esteem is MP Narayanan, the former IB chief who served as Prime Minister Manmohan Singh’s National Security Adviser (NSA) and whom the author repeatedly calls “the great MP Narayanan”.

The book ends with a fascinating portrayal of former IB chief and current NSA Ajit Doval, whom Mr Dulat calls “the best ghost of us two”. This includes Mr Doval’s rise on Prime Minister Modi’s ladder of affections, even though he began his rapid rise as a trusted official of LK Advani.

The book is well produced and is indexed and bookmarked in detail. Mr. Dulat’s light, self-effacing style of writing offers a welcome change from the turgid prose that too often characterizes the biographies of senior officials. The book will find a place on the shelves of those who follow Indian politics, security and intelligence.