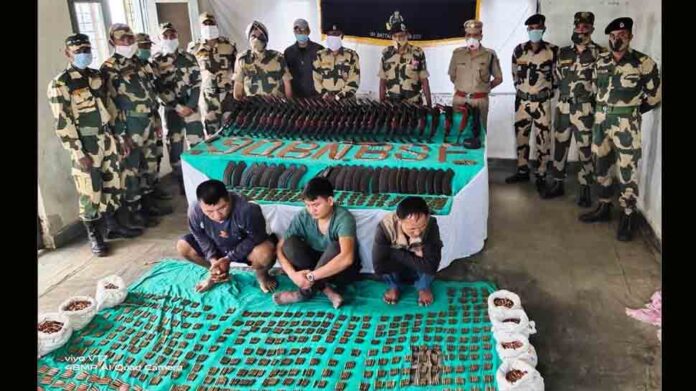 According to the force, this was an ‘attempt by anti-national elements to smuggle arms and ammunition into Indian territory’.

The BSF said that they received reliable information about the infiltration attempt from a source and accordingly launched an operation.

A team of personnel from 90 Battalion BSF, based in Mamit district laid an ambush on the route that was being taken by the anti-national elements. The forces learned that they were bringing in AK series Rifles along with a lot of ammunition for some insurgent groups.

In the late hours, two vehicles were spotted approaching from West Phaileng, which were intercepted and taken into control by the alert BSF party, who then also detained three occupant passengers.

The two vehicle and three arms smugglers were then handed over to Phaileng Police Station.

The alert BSF troops were able to foil the design of anti-national elements to supply arms and ammunition and create disturbances in Mizoram. This is one of the biggest seizures of arms and mmmunition in northeast in the past several years.

Against Chinese claims, it’s time for the Arunachali frontier to be heard – Defence News of India