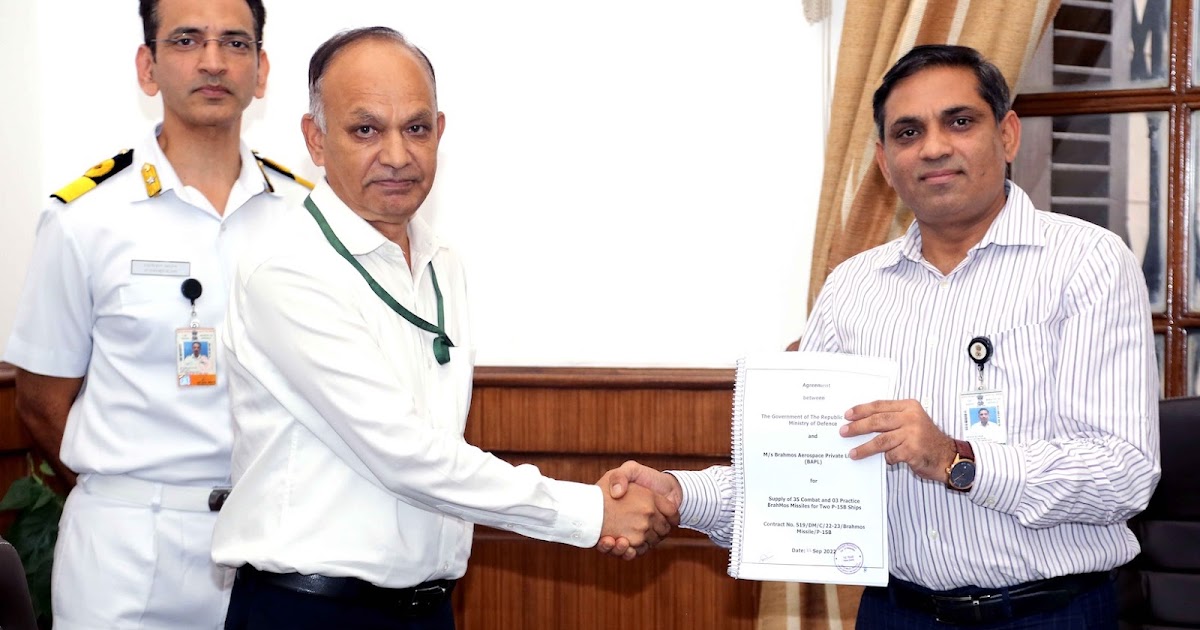 For the first time, evidence from the Ministry of Defense (MoD) reveals that the latest and most advanced variant of one of India’s most closely guarded weapon systems – the indigenous BrahMos cruise missile dual role and extended range – works for approximately Rs 34 crore ($4.85 million) each.

On Thursday, the MoD announced that the Navy had ordered the shipborne version of the supersonic BrahMos “at an approximate aggregate cost of ₹1,700 crore in the Buy-Indian category”.

The announcement revealed that the BrahMos missile systems being procured were “dual-role capable”, meaning they could destroy targets on land, while having the capability to strike ships from enemy war.

The MoD did not disclose the number of missiles purchased under the latest contract. However, this information was inadvertently revealed through an official MoD photograph that accompanied the announcement.

The photograph of the contract document indicated that it was an “agreement between [Brahmos Aerospace and the MoD] for the supply of 35 combat missiles and 03 training Brahmos missiles for two ships of Project-15B.

The two Project-15B warships that will receive these BrahMos systems are currently under construction at Mazagon Dock Ltd, Mumbai (MDL). These are the destroyers, INS Visakhapatnam and INS Mormugao.

Around Rs 200 crore would be spent on the missile launchers, command center and radar for each destroyer, sources from BrahMos Aerospace Private Limited (BAPL) – the Indo-Russian joint venture (JV) building the BrahMos missile – reveal.

That leaves around 1,300 crore rupees for 38 BrahMos missiles, bringing the cost of each missile to around 34 crore rupees ($4.85 million).

This is significantly higher than previous estimates that the Army and Navy paid around $3.2-3.5 million for each of their BrahMos missiles. However, these earlier missile variants had ranges of just 295 kilometers, while INS Visakhapatnam and INS Mormugao will be armed with longer-range missiles that can hit targets up to 400 kilometers away.

The range of earlier versions of the BrahMos was kept below 300 kilometers, since the Missile Technology Control Regime (MTCR) imposes this range restriction on sales involving a non-MTCR country. India was only admitted into the MTCR in 2016, after which Brahmos could legitimately build and sell missiles with a range of over 300 km.

A more expensive BrahMos variant is the air-launched cruise missile (ALCM), which is carried in an underbelly pod by the Sukhoi-30MKI fighter. Developed by IAF, Hindustan Aeronautics Ltd (HAL) and Defense R&D Organization (DRDO), tit is half a ton lighter than the regular BrahMos and about 50 centimeters shorter.

Although the BrahMos ALCM is the lightest and shortest, it is not the cheapest.In October 2012, the Indian firm allocated $1.1 billion to the IAF for the acquisition of 200 BrahMos ALCM. This brings the unit cost of the ALCM BrahMos to $5.5 million.

One of the reasons for the higher cost is that each BrahMos ALCM operates autonomously in its launch and command and control functions, since it would be launched several hundred kilometers from base, out of range of the center of usual BrahMos command and control. Each ALCM launcher has its own command center, a “peripheral control device”, which checks the health of the missile before it leaves the launcher.

Paradoxically, the BrahMos ALCM actually has the longest range of all variants: over 1,000 kilometres. It is carried for several hundred kilometers by the Sukhoi-30MKI. After being released from the fighter, it can travel another 300-400 kilometers, under the missile’s own propulsion system.