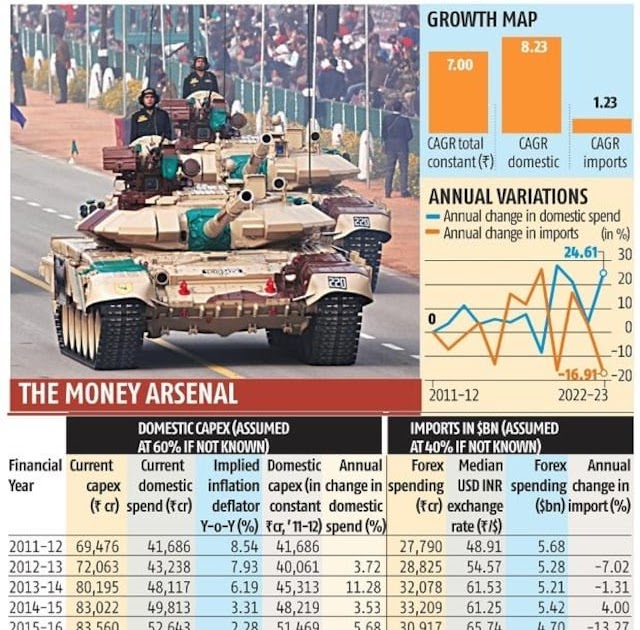 An analysis of defense capital expenditure (capex) indicates an increase in spending over the past four or five years, as well as a noticeable shift towards indigenization. Adjusted for inflation, capital allocations to the defense sector have grown at a compound rate of around 7% between the base year 2011-12 and today (2022-23).

While rupee-denominated expenditure increased by just over 8%, imports grew by only 1.2% over this 11-year period. Allocation patterns have been quite uneven.


Let’s explain how we looked at the data. We researched defense capital allocations, including capital expenditures spread across several different budget headings and grant applications, to arrive at annual expenditures. For example, in the 2019-2020 budget, capital allocations for the construction of border roads are not included in the capital budget (Request No. 21), but buried as Request No. 19 under the direction of the ministry. of the defense.

For six of these 12 fiscal periods (including the reference year, 2011-2012), the declarations of the Ministry of Defense in Parliament gave the ratio between domestic investments and imports. These range from 50:50 in 2018-19 to a target of 68% of domestic spending for the current fiscal year, with most years seeing a trend of 60% of domestically committed spending. Where there is no clear attribution, we assumed that 60% of expenditure was local.

The domestic capex component has been adjusted for inflation and the import component has been converted into USD since all defense spending, even imports from France or Russia, are denominated in USD. The inflation adjustment was made using the deflator, compiled from data from the Ministry of Finance, the Ministry of Statistics and Program Implementation and the World Bank. Overall, the GDP deflator indicates that inflation has reached an annualized rate of 5.2%. However, it was above 9% in 2021-22 and in the current fiscal year (until August).

A deflator is a ratio of the value at current prices of all goods and services in the economy in a given year relative to the value in the base year, which is 2011-12 in this case.

To convert Rupees to Dollars, the midpoint USD-INR exchange rate prevailing during the relevant tax periods has been used. A median is a median value – in a year it would be the USD-INR value which has 182 values ​​above and 182 values ​​below. The USD has strengthened from Rs 48-49 in 2011-12 to over Rs 81 in September 2022 with a median value of Rs 78.84/USD for the current financial year.

These approximations give a clear picture of trends. Although the nominal allowance has increased every year from Rs 69,476 crore (2011-12) to Rs 160,071 crore (budget estimate 2022-23), the allowances have been uneven if we adjust them for inflation.

In 2012-13 and 2021-22, the allocation was actually lower after inflation than in the previous year. There was a huge 20% year-over-year jump in capital spending in 2020-21, and there was a 10% increase in 2022-23. It would seem that the creation of infrastructure and the filling of gaps in the military arsenal after the Chinese incursions into eastern Ladakh in April 2020 are at least partly responsible for this increase in capex.

However, over this entire period, defense spending grew at a CAGR of 7%. It should be noted that defense spending rose sharply by 9% CAGR after 2016-2017, even though GDP growth has fallen since then.

The value of imports has fluctuated a lot, probably because it’s “lumpy”. Defense equipment imports are paid for in the year of their delivery, with the exception of an advance on signature of 10 to 15% of the value of the contract.

There may be a peak in investment in a year when a large contract is signed (through the advance payment) or when a larger than normal delivery takes place (for example, a full squadron of planes or a tank brigade). There were years like 2018-19 and 2019-20 where imports grew 26.5% year-on-year to $7.7 billion in 2018-19 and then fell 16% to 6, $5 billion in 2019-2020. In each of these cases, there is a larger than normal delivery – for example, the Rafale (imports) or Tejas (domestic) fighters, or the Russian S400 air defense system (imports) – to explain the rebound.


It could also be due to the accelerated construction of communication infrastructure along the northern borders of the Himalayas in recent years. This means that part of the national capital expenditure has been allocated to roads, barracks, etc., which requires the use of locally sourced cement, steel and other building materials, rather than expensive imported weapons and detection equipment.