Home Defence News India Wants To Replace Its MiG-27s, But What Jet Will Replace It? 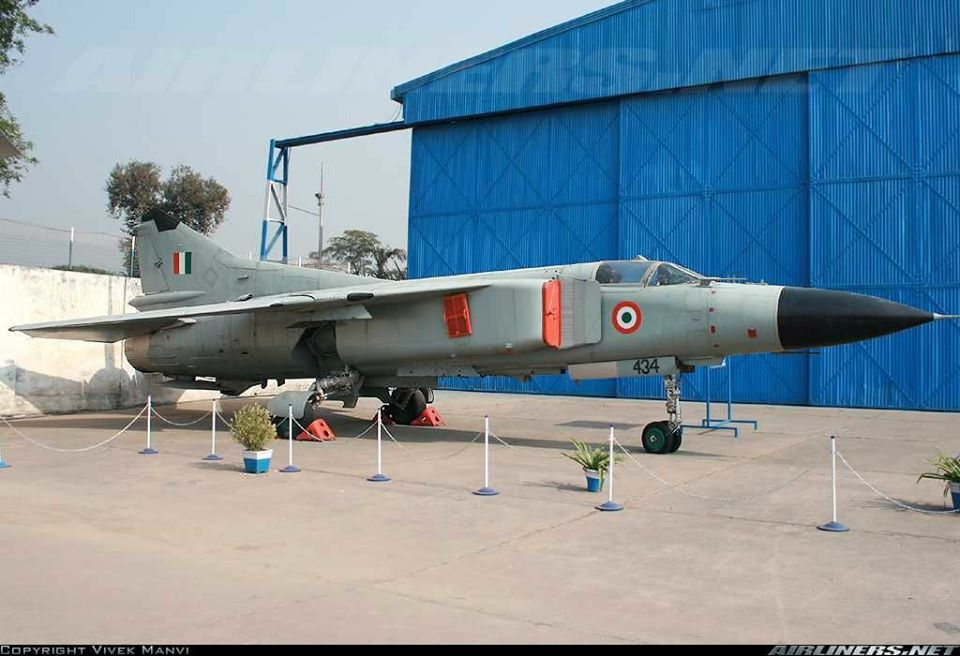 The Indian air force plans in December 2019 finally to retire its last few Soviet-designed MiG-27 Flogger fighter-bombers, bringing to an end 38 years of MiG-27 operations in India and leaving the Kazakh air force as the last operator of the 1970s-vintage, swing-wing warplane.

New Delhi’s last MiG-27 unit, No. 29 Squadron is based in Jodhpur in Rajasthan. Two other MiG-27 squadrons shuttered in 2016.

Pilots and planners probably won’t miss the speedy but volatile MiG-27, a ground-attack derivative of the MiG-23 interceptor. U.S. Air Force test pilots who flew a captured MiG-23 under the auspices of the once-secret Constant Peg program, literally were afraid of the plane owing to its tendency to explode in mid-flight.

The Indian air force acquired the first of 165 locally-assembled MiG-27s starting in 1981. The type flew in combat during the Kargil War between India and Pakistan in 1999. In essence, a simpler MiG-23 without that type’s air-to-air radar, the MiG-27 with its powerful R-29 engine at low altitude could accelerate to a top speed of around Mach one.

But the plane was complex and unsafe compared to Western types. Even other Soviet types were safer to fly than the MiG-27 was. The Indian air force lost at least 10 percent of its MiG-27s in crashes.

Sri Lanka’s experience was even worse. The Sri Lankan air force in the late 1990s acquired from Ukraine a batch of six MiG-27s plus a MiG-23 trainer. The Sri Lankan government at the time was at war with the Tamil Tigers rebel group. It wanted a fast fighter-bomber that also could operate at low level.

The MiG-27 arguably was a poor choice. It’s unsurprising that Gotabaya Rajapaksa, the country’s wartime defence secretary, later was accused of accepting bribes in exchange for approving the MiG buy. A newspaper editor died in an apparent assassination after reporting on the allegedly corrupt fighter deal.

The initial six MiG-27s, plus a follow-on batch of six Floggers and one trainer that the country bought in 2000, performed poorly in Sri Lankan service, even when flown by experienced Ukrainian mercenary pilots.

U.S. advisers in 2001 assessed the Sri Lankan air force’s No. 12 Squadron, which flew the MiG-27s and found it wanting. Air force leaders “never bothered to procure the required weapons systems/ammunition for them,” The Island reported. “On the basis of testimony of both army and [air force] personnel, the U.S. pointed out the failure on the part of No 10 [flying Israeli-made Kfirs] and No. 12 squadrons to destroy targets.”

No fewer than four of Sri Lanka’s 14 MiG-27s and MiG trainers crashed. A Tamil Tiger commando raid destroyed another MiG on the ground. As late as 2017, seven MiGs remained in the Sri Lankan air force’s inventory, but none were flight worthy.

The air force in early 2019 finally shut down No. 12 Squadron, formally ending the MiG-27’s service in the country and reportedly leaving Sri Lanka with just a handful of operational Kfirs and Chinese-made F-7s.

India is struggling to replace its MiG-27s and other old fighters. New Delhi wants to spend around $18 billion acquiring 110 new fighters to replace MiG-21s and MiG-27s. The new planes would fly alongside European-designed Jaguars, French Mirage-2000s and Rafales, Russian MiG-29s and Su-30s and India’s own indigenous Tejas fighter in what American plane-maker Lockheed Martin described as “the world’s largest fighter aircraft ecosystem.”

Lockheed is pitching to India a new “F-21” version of its iconic F-16 fighter. For the purposes of Lockheed’s marketing campaign, the F-21 is a new fighter, although it shares many of its major features with the F-16V the company has sold to Bahrain, Greece, Slovakia, South Korea and Taiwan.

Defence News Vikas Gupta - July 16, 2020 0
SOURCE: ZEE NEWSIndia on Thursday got second consular access to Kulbhushan Jadhav, who had been arrested by Pakistan on alleged espionage charges and...

Defence News Vikas Gupta - July 16, 2020 0
SOURCE: OUTLOOK INDIAHistorian and author Srinath Raghavan, who has written books on the 1962 India-China war as well as the 1971 war and the...