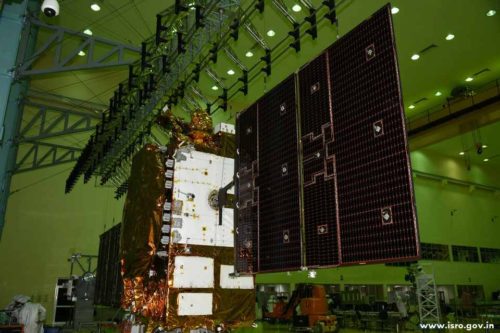 2018 is proved as one of the best year for Indian Space Research Organizaton (ISRO). From “31 satellites in one go” to “The Heaviest Satellite of India”, ISRO has developed a lot of satellites for India and also for other countries. The latest in the list is GSAT-7A, also known by the name “Angry Bird” is a 2250 Kg communication satellite launched by GSLV-F11. GSLV-F11 is the 13th flight of india’s GSLV and the 7th flight of GSLV with Indigenous Cryo stage. GSAT-7A was launched on Wednesday, December 19, 2018 from Second Launch Pad(SLP) at Satish Dhawan Space Centre, Sriharikota.

GSAT-7A is not the first satellite that ISRO developed for Indian Defence Forces. At the time of writing this article, ISRO has developed and launched 14 satellites for Indian Defence Forces. Previously, GSAT-7 also known by the name “Rukmini” was launched on September 29, 2013 for the Indian Navy. GSAT-7 is helping Indian Navy in the Indian Ocean region. GSAT-7C, another communication satellite is in the manufacturing process and will be launched in the coming years and this is again for the Indian Air Force.

How many Military satellites are in the space?

At the time of writing this article, so far 320 military satellites are known to be orbiting our planet Earth. These satellites belong to different countries but most number of satellites are said to be of United States. United States own around half the number of total satellites orbiting Earth followed by Russia and China. In this list, India has total 14 satellites and this number soon to be reached 20.