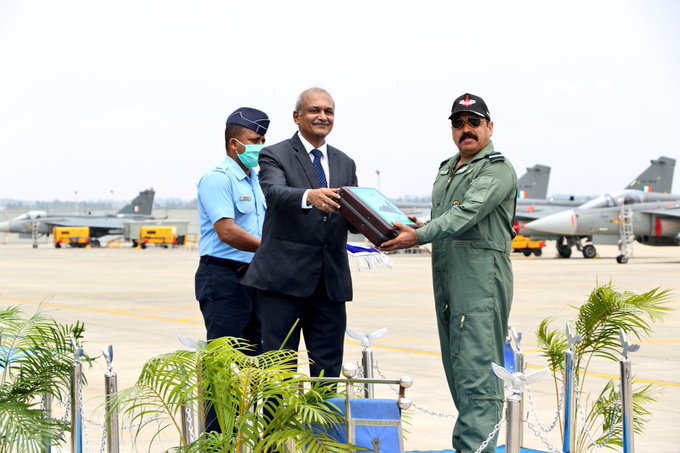 Chief of Air Staff Air Chief Marshall R K S Bhadauria called upon the defence manufacturing industry to grab the opportunity presented by the current situaion and work together with IAF to “change the face of Indian defence industry”. Operationalizing No 18 Squadron of the Air Force, equipped with indigenously made final operations clearance (FOC) version of light combat aircraft (LCA) Tejas Mk1 at Sulur in Tamil Nadu on Wednesday, Bhadauria urged the defence industry to synergize with other stakeholders to design and develop aviation systems suitable for air force.

Addressing members of the squadron, delegates from Hindustan Aeronautics Limited and Aeronautics Development Agency after the official ceremony, Bhaduaria said a lot of work was happening in IAF in order to fine tune its capabilities. This fine tuning on technology and capability fronts was being done as far as possible within the country.

“Only when it is absolutely essential, we seek capability outside,’’ he said, underlining the significant role the defence industry could play in the current phase to cater to the needs of the IAF to design and develop suitable indigineous defence systems. “So much is possible within the country,’’ he said.

Noting that IAF was close to signing the contract for 83 Tejas Mk 1A fighter crafts with HAL, he said the mission and requirement of IAF for the next two to three decades was to seek indigenously made systems, from Tejas Mk 2 crafts, radars and technologies among other things.
Bhadauria stressed more than once on the need for synergy and working together by defence design, development, production sectors with the Air Force.

“We should be able to grab this opportunity and change the face of defence industry in the country in the next 10 to 20 years. If you do not act now , you will lose time and opportunity,’’ he said. Bhadauria noted that in trying to change the face of the defence industry, budget will be an issue, but budget constraints should not become an excuse for the industry to not take off.

Earlier, Bhadauria said the operationalization of No 18 squadron was a moment of pride for Sulur Air Force Station, the Air Force and the defence manufacturing industry. With the operationalisation of “Flying Bullets” and induction of Tejas, Sulur now has two squadrons equipped with Tejas. “Flying Daggers”, the No 45 squadron operationalised at Sulur in 2018, was the first to induct Tejas, but an initial operational clearance (IOC) version. The current version inducted into No 18 squadron is an improvised one, after incorporating the feedback given by airforce pilots.

HAL chief managing director R Madhavan, Girish S Dheodhare, Director of ADA, and Air Marshal Amit Tewari, Air officer commanding-in-chief of Southern Air Command were present. The famed No. 18 Squadron which participated in 1971 Indo – Pakistan war was formed 1965 but was decommissioned in 2016 and has been resurrected now at Sulur. “As time goes on, No 18 and No 45 sqaudraons will become the core of our growth in terms of combat capabilities,’’ Bhaduaria said.