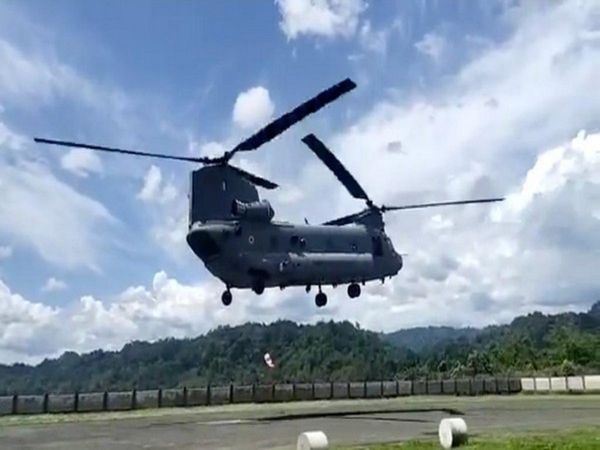 In a bid to bolster its capability to deploy troops and machines rapidly at remote places including the borders with China, the Indian Air Force has inducted the Chinook heavy-lift helicopters at the Mohanbari airbase in Assam. On Thursday, the Chinooks were for the first time deployed for operations in the Vijaynagar sector of Arunachal Pradesh where they delivered 8.3 tonnes of essential commodities for the remotest part of the state surrounded by Myanmar from three sides, sources said.

Arunachal Pradesh Chief Minister Pema Khandu tweeted a video of the chopper taking off with supplies meant for the citizens in Vijaynagar. The Chinooks were recently inducted at the Mohanbari airbase in Assam and would be soon deployed for operations in Sikkim, Arunachal Pradesh and other nearby areas.

The Chinooks are considered to be one of the best choppers for inter-valley troop transfer operations in situations like the one which recently happened in North Sikkim where Chinese came to Indian positions in large numbers. The Air Force feels that the Chinook, with its operating ceiling of 20,000 feet, will redefine heli-lift operations in the country that includes operations like inter-valley transport of troops, airlifting artillery guns and heavy underslung loads for the Border Roads Organisation.

It will also use the choppers for humanitarian assistance and disaster relief to far-flung crisis-hit areas.

The Chinook can also be used to deploy artillery guns at high altitude positions with the China border in the northeast.

The Border Roads Organisation would also use the Chinook to complete road-building projects in the North East that have been stuck for years for want of a heavy lift chopper that can carry material and equipment through narrow valleys.

Chinook is one of the two helicopters other than the Apache attack choppers for which India had signed deals in 2015-16.