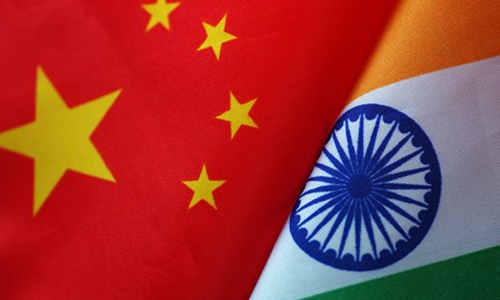 India in recent days has illegally constructed defense facilities across the border into Chinese territory in the Galwan Valley region, leaving Chinese border defense troops no other options but making necessary moves in response, and mounting the risk of escalating standoffs and conflicts between the two sides.

There is no line of actual control along the China-India border that both sides recognize. Due to the improvement of infrastructure at the border area, the two countries have ramped up patrols, which have led to more frequent standoffs as a result. Yet most of them were directly and properly eased through communication among frontline officers. Only a few incidents have been exposed by media outlets. But they aroused public attention.
Unlike previous standoffs, the latest border friction was not caused by accident, but was a planned move of New Delhi. India has been clearly and definitely aware that the Galwan Valley region is Chinese territory. But according to media reports, since early May, India has been crossing the boundary line into the Galwan Valley region and entering Chinese territory. Indian soldiers have also deliberately instigated conflicts with their Chinese counterparts. If India failed to stop such provocations as soon as possible, it will impact on Beijing-New Delhi ties – and may even exceed the sort of intensity of the Doklam standoff.

In the summer of 2017, a standoff over the Doklam deteriorated bilateral ties between China and India. However, thanks to the efforts of the two governments, particularly during informal meetings between the two countries’ top leaders in April 2018 and October 2019, strategic trust was restored. The results have not come easily and should be cherished by both sides.

Some Indians believe slowed Chinese economy growth and some Western countries’ blame game on China provide them a great opportunity where the border issue will fall to their advantage amid the COVID-19 pandemic.

This may reflect the viewpoints of certain circles from the Indian government and military. However, this speculative mind-game is based on an incorrect judgment of the international order and China’s national condition. This is flawed logic and ultimately detrimental to India.

China has been the first to effectively curb the coronavirus epidemic. Businesses and people’s life in China have already returned to normal. This demonstrates the strong leadership of the Chinese government and firm social cohesion in China.

Meanwhile, the number of India’s confirmed COVID-19 cases has surpassed that of China, and the inflection point in India is yet to come. Currently, India’s top priority should be handling the epidemic and restoring economy rather than instigating border disputes.

Media reports saying that China is facing global isolation have turned out to be an illusion that represents the US interests. The current international situation is not in favor of India to take advantage of China. Some people in India and other countries believe that the international community equals the US, and that whichever country that has disputes with the US is in “international isolation.”

Although a handful of Indian media outlets and social organizations echo the Trump administration’s views, the Indian government should keep a sober head to not be used as cannon ash by the US. The World Health Assembly held on May 18 and 19 showed that it was the US, not China, that had been isolated by the international community.

Although China’s relationship with the US is tense, the international environment for China is much better than it was in 1962 when India started and crushingly defeated in a border war with China. In 1962, the national strength of China and India were comparable. Today by stark contrast, China’s GDP is about five times that of India.

Generally, US allies have not followed its strategic oppression of China. Even those pro-US Indians will not count on the Trump administration, which advocates the “America First” policy, to really back India. The Trump administration encourages India to be tough on China so as to provoke and profit from the China-India disputes.

The more the Chinese nation is exposed to external pressures, the more it will be tightly united. Hopefully, the Indian government, military, scholars and media will improve their understanding and research on China. As an ancient civilization, India is wise enough to avoid understanding China through biased US lens. It is in the interests of India to understand the real China and make correct and strategic judgments on this basis.