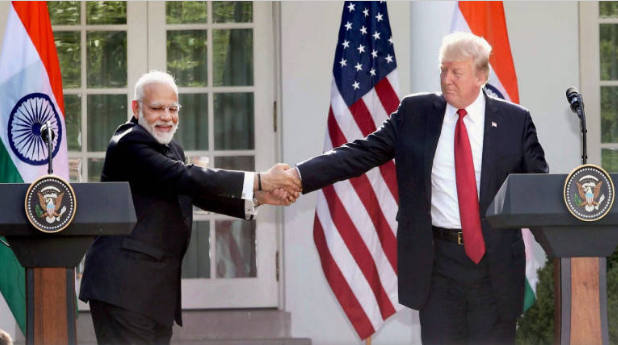 India and the United States on Wednesday agreed to deepen their bilateral cooperation, increase defence trade, intensify their coordination with like-minded countries like Japan for a peaceful Indo-Pacific region and put up a decisive fight against terrorism.

The second 2+2 India US ministerial dialogue in the US capital chalked out a pathway to take the bilateral relationship between the two countries in 2020 to a new level as they inked a number of agreements ranging from greater interaction between elected representatives, industrial security annex (ISA), to collaboration in space, science and water, people to people exchange.

“Today’s dialogue built on steady progress over this past year. We secured new agreements on space exploration, defence and industrial collaboration,” US Secretary of State Mike Pompeo told reporters after the conclusion of the 2+2 dialogue.

“We agreed to establish a new exchange programme for legislators from our two countries. We launch new initiatives to help secure internships for innovators in each of our two countries and we are excited to support India’s coalition for disaster resilient infrastructure,” Mr Pompeo added.

Mr Pompeo was joined by Mr Singh, Mr Jaishankar and Mr Esper at the joint news conference.
“Today we had a good lively and productive exchange of views on significant regional challenges. We value India’s perspective on security in the Indo-Pacific and frankly all around the world,” Mr Pompeo said.

The US Secretary of State further said,”The future of Afghanistan matters to each of our two nations, and we are working together toward a more secure, prosperous peaceful future for the Afghan people and we appreciate India”s contributions to Afghanistan and intend to continue consulting closely on that matter.”

Describing the 2+2 meeting “meaningful and successful in maintaining the momentum” of the India-US relationship, Mr Singh said the signing of the industrial security annex before the 2+2 dialogue will enable a smooth transfer of classified technology and information, between private entities of the US and India.

“Both India and the US have the vision of a free, seamless, and peaceful Indo-Pacific, and we feel that this provides an opportunity for India to work with the US,” he said.

“During the meeting, we shared our assessments of the situation in Afghanistan, Pakistan, Nepal, Sri Lanka, and the Indian Ocean region in general. We conveyed that the extreme rhetoric and belligerent statements and incitement to anti-Indian violence by Pakistani leaders is not conducive to peace. Our military to military cooperation has expanded and our military exercises have grown in size, scale, and complexity,” Mr Singh added.

Among the key issues discussed during the meeting were the Indo-Pacific, including ways to leverage their respective strengths to benefit not just the two countries, but the entire region, Mr Jaishankar said.

“Our cooperation is aimed at advancing a free, open, inclusive, peaceful, and prosperous Indo-Pacific based on the recognition of ASEAN centrality,” he said.

“We are each promoting connectivity and a development partnership among countries in the region, and there is an opportunity, I believe, to build further synergies,” he said.

The two countries have also agreed to promote UN peacekeeping capacity building of partners in the Indo-Pacific, expanding on a successful programme of trilateral cooperation that both did with African countries.

“We are delighted to welcome the United States as a founding member of the coalition for disaster resilient infrastructure, which will enhance its effectiveness in the regions preparedness against natural disasters,” Mr Jaishankar said.

India and the United States, Mr Jaishankar said discussed ways to address these challenges, including by working closely together at the FATF. “We also took note of exchanges between our judicial academies for appreciation of challenges and evolving practices and adjudicating counter-terrorism cases and agreed to further facilitate such exchanges in the areas of criminal jurisprudence,” he said.

The four leaders also had a brief discussion on trade, he added.

Mr Esper said the discussions reinforce the strategic interest shared by the two countries and help them build upon the gains from last year.

“As democracies, the United States and India have an abiding interest in advancing a free, open and prosperous Indo-Pacific region. Our close bilateral ties are critical to the success of that mission and I am pleased to report that we continue to make substantial progress in our military relationship,” he said.

The ISA, he said, will facilitate collaboration between the defence industries by supporting the secure transfer of key information and technology. “We also finalised three agreements under the defence technology and trade initiative which will enhance our ability to co-produce and co-develop critical technologies,” Mr Esper said.