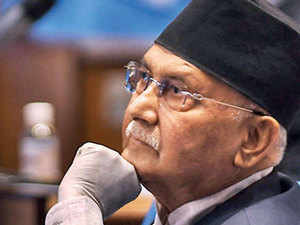 India began weighing various options to send strong messages to Nepal as its Minister for Law, Justice and Parliamentary Affairs Shivamaya Tumbahangphe on Sunday presented the Constitution Amendment Bill (second amendment) in Parliament to update the political map of the country that includes Indian territories. Nepal’s Parliament is likely to adopt the Bill even as hectic diplomatic moves are underway.

India believes that Nepal is ignoring the fact that the area of Lipulekh (which Nepal is claiming as its territory) has been a border trading point between India and China based on pacts since 1991. The first objection to Lipulekh as part of India’s new map was raised by the Opposition Nepali Congress in November 2019. Subsequently, the ruling party hardened its position as nationalism dominated the discourse in Nepali polity.

However, the Oli government’s move could vitiate the atmosphere impacting people-to-people ties, say Nepal watchers. The hand of China behind the episode cannot be ruled out. India will be raising with Nepal its decision to alter the map ignoring certain Sino-Indian pacts, ET has learnt. Interestingly, Kathmandu had never raised any objections to those pacts since 1990s. In December 1991, during the then premier Li Peng’s visit to New Delhi, a memorandum of understanding was signed between China and India on ‘Resumption of Border Trade’ which mentioned Lipulekh as a mutually recognised border trading point. India and China signed a ‘Protocol of Entry and Exit Procedure’ for border trade in July 1992 which again mentioned Lipulekh as a mutually recognised border trading point.

On April 11, 2005, the then Chinese premier, Wen Jiabao, and his then Indian counterpart, Manmohan Singh, signed an agreement aimed at confidence-building along the Line of Actual Control. Article V of this agreement stated: “Both sides agree in principle to expand the mechanism of border meeting points to include Kibithu-Damai in the Eastern Sector and Lipulekh Pass/Qiang La in the Middle Sector. The precise locations of these border meeting points will be decided through mutual consultations.” Delhi suffered a setback when the Opposition Nepali Congress, on Saturday, took a u-turn and decided to vote in favour of the Constitution amendment bill put forth by the government in Parliament to update the new political map of the country.