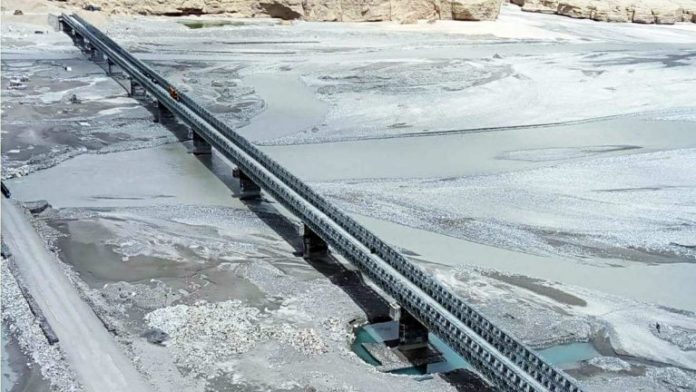 As the stand-off with China along the Line of Actual Control in eastern Ladakh continues, India is busy finishing the bridge over the Galwan ‘nallah’ that the Chinese had objected to, ThePrint has learnt. Government sources said work on the concrete bridge, which is set to replace an existing wooden bridge, is going on, and India has made it clear to the Chinese that it will carry on with border infrastructure development.

The Print had earlier reported that China’s main concern in the Galwan Valley was this bridge. “The work on the bridge, which is about 7 to 7.5 kilometres from the LAC, had started much earlier. However, around 10 May, the Chinese came to know of the construction and objected to it. However, the work on the bridge continues. The ongoing issues have only made us work faster on this bridge,” a senior official in the security and defence establishment said on the condition of anonymity.

The bridge is part of a network of feeder roads that India is building connecting the strategically important Shyok-Daulat Beg Oldi road, inaugurated by Defence Minister Rajnath Singh last year.

“The Chinese have no objection to the Shyok-DBO road, and that road is about 9-10 km from the LAC. The objection was to this bridge that we were constructing. We have made it clear that the construction is happening well within Indian territory and it will go on,” said the official.

Sources stressed that while there is troop build-up on both sides of the LAC, the focus is on resolving the issue through talks.

Government sources said one of the reasons why China objected to the bridge could be that it is doubtful of India’s intent, after it bifurcated the state of Jammu and Kashmir into two union territories, one of which is Ladakh, and subsequently started raising its voice about Aksai Chin.

Sources said these suspicions were despite External Affairs Minister S. Jaishankar’s visit to Beijing last August to reassure China that India was not raising any additional territorial claim on contested areas in the region, as reported by Hindustan Times on 3 June.

China not only supported Pakistan on the Kashmir issue in last year’s closed-door informal session of the UN Security Council, but also raked up the status of Aksai Chin, as reported by The Economic Times: “Chinese Permanent Representative in the UN claimed that the government’s decision to abrogate Article 370 challenged China’s sovereign interests and violated bilateral agreements on maintaining peace and stability in the border area.”

They added that China is uncomfortable with the infrastructure development, which started about two decades ago but has gathered steam in recent years.

“China feels that the tactical advantage it has at the LAC with regard to swift deployment and movement will be eroded,” a source said.

The situation in Galwan

The government sources ruled out any presence of Chinese troops on the Indian side of the Galwan Valley. The LAC and the Chinese Claim Line are the same in this area.

“The Chinese at no place have crossed their claim line, which at places differs from our claim line. In Galwan, both claim lines are similar,” a source said.

The Indian and Chinese armies have been holding meetings at Patrol Point 14, at the mouth of the Galwan Valley. “This is the meeting point area in the Galwan for talks,” a source said, admitting that both sides have built up troops and equipment, after the first move by the Chinese. ThePrint was the first to report that Indian forces executed “mirror deployment” along the LAC.

Sources admitted that the Chinese have crossed the Indian claim line in the larger Hot Spring area by about 3 km, as reported by ThePrint.

A limited number of India and Chinese soldiers are facing off at these locations. However, they are backed by a larger number of troops and equipment behind them.

Small disengagement steps have been taken by both sides in Galwan and the Hot Spring area as part of confidence building measures, following the talks between 14 Corps Commander Lt Gen. Harinder Singh and his Chinese counterpart Saturday. However, this cannot be described as de-escalation.

Pangong Lake is the trouble spot

Government sources said talks on the Finger area of the Pangong Lake could take longer, as China has refused to budge from this area so far.

The Chinese have come down to ‘Finger 4’ of the northern bank of the lake to stop the Indian soldiers from patrolling until ‘Finger 8’, which is the Indian claim line.

Over the last few years, sources said that whenever Indians used to carry out their long range patrol from ‘Finger 2’, Chinese troops used to come down from their Srijap post and try and prevent Indians from moving beyond ‘Finger 5’.

However, just before the winter settled in last year, the Indians managed to reach ‘Finger 8’ by using an alternate track through the heights.

“This caught the Chinese by surprise and hence they have come down to ‘Finger 4’ (Chinese claim line) and also the heights there to prevent Indian patrols from going forward. The talks on this issue may take a little longer,” the government official cited at the beginning of this report said.

Movement of mechanised columns and artillery

Sources said while forward positioning of the People’s Liberation Army (PLA) is a concern, the movement of artillery and mechanised columns should not be seen as too alarming.

“Any kind of mobilisation will come with their own attachment and detachment. People who don’t understand this tend to be too alarmist,” the official quoted above said.

India too has deployed additional troop strength in Ladakh, including elements of artillery and other equipment.

“There are a number of support systems that are needed when you move a large number of soldiers. There would be vehicles to transport them, tents to make them stay and so on,” a source explained.

“Also, to stay that Chinese artillery guns have been deployed at LAC is being naïve, because these guns come with stand-off ranges. They can target Indian positions from well within their territory, just like Indians guns can do.”

Defence News Vikas Gupta - August 13, 2020 0
SOURCE: INDIA TODAYThe government has decided to establish cluster zones for the security of panches and sarpanches, who are vulnerable to threats...

Defence News Vikas Gupta - August 13, 2020 0
SOURCE: INDIA TODAYChina has demanded “a fair, just and non-discriminatory environment for the normal operation of Chinese companies in India” after the...