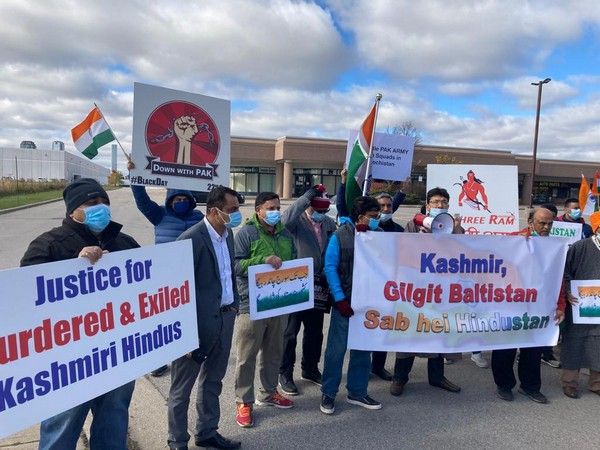 Indian diaspora on Saturday staged a protest outside Pakistan Consulate, Toronto Canada to register their protest over Pakistan’s attack and invasion on October 22, 1947.

“We are gathered here to protest against the genocide committed upon the people of Kashmir in 1947 by the terrorist state of Pakistan. On October 22, Pakistan army and its tribal force organised gathered forces, led by a Pakistani major that invaded into Kashmir, a peaceful Kashmir where there was no provocation against the Pakistani state and its people,” a protestor said.

“The tribal militia committed genocide and raped women and plundered the peaceful land of Kashmir,” he added.

Another protestor said, “Today, on October 24, we are protesting in front of the Toronto consulate so that Pakistan government realises that terrorism is not alright.”

The members of the Baloch Human Rights Council Canada also participated in the protest to show their solidarity with the Indian diaspora.

The Protest was arranged by Hindu Forum Canada and Indo-Canadian Kashmir Forum. The members of ‘Canadians for Human Rights Watch’, ‘Canada India Global Forum’ and NIMITTEKAM CANADA also participated in this protest.