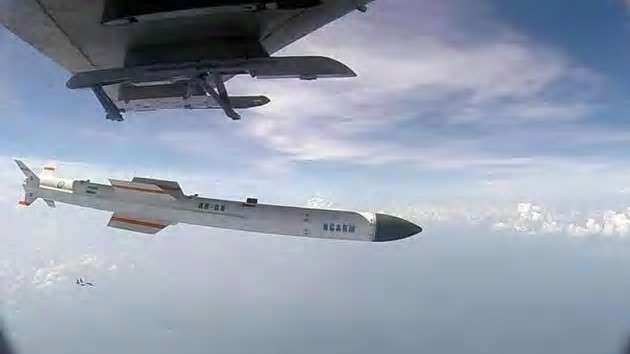 India on Sunday tested a naval version of the BrahMos supersonic cruise missile. The missile was fired from the indigenously-built stealth destroyer, INS Chennai.

With the successful testing of BrahMos, India has now tested 11 missiles within a period of two months. The test-firing of these missiles comes at a time when India is involved in a bitter row with China along the Line of Actual Control (LAC) in Eastern Ladakh. The standoff also led to clashes in Ladakh’s Galwan Valley in June in which 20 Indian soldiers were killed.

India has test-fired a new version of the surface-to-surface supersonic cruise missile BrahMos and anti-radiation missile Rudram-1. It has also test-fired Shaurya which is a laser guided anti-tank guided missile and nuclear capable hypersonic missile.

India has also deployed a sizeable number of BrahMos supersonic missiles at the LAC.

Here is a list of missile and weapons system India has tested in the last two months:

September 7: Indigenously-developed hypersonic technology demonstrator vehicle (HSTDV), which is essential to power cruise missiles and long-range missile systems, was tested off the coast of Odisha.

September 22: ABHYAS – High-speed Expendable Aerial Target (HEAT) vehicles – were tested off the coast of Odisha. These can be used as target for evaluation of various missile systems.

September 23: DRDO test-fires indigenously developed laser-guided anti-tank guided missile at Ahmednagar in Maharashtra. It can be used to defeat “armoured vehicles protected by explosive reactive armour (ERA)”, according to DRDO.

September 23: Prithvi-II test fired from Balasore, Odisha. It is an indigenously developed nuclear capable surface-to-surface missile which uses an advanced inertial guidance system with maneuvering trajectory to hit its target, according to DRDO.

Against Chinese claims, it’s time for the Arunachali frontier to be heard – Defence News of India