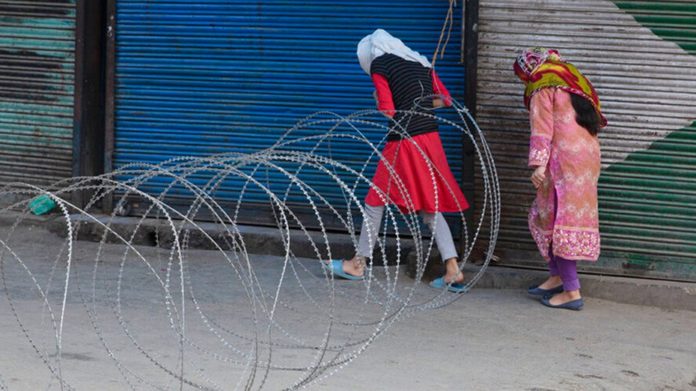 The Supreme Court on Monday formed a high-powered committee to examine the ban imposed on 4G Internet in Jammu and Kashmir but refused to direct its removal.It advocated “a delicate balancing” between the imperatives of national security and citizens’ fundamental rights, keeping in mind the rising militancy in the region and Pakistan’s “information warfare”.

The panel, headed by the Union home secretary, will examine the restrictions and suggest their area-wise removal, if feasible, after talking to the petitioners and representatives of the Centre and the Union Territory administration. A January 10 judgment by the same bench, on petitions from journalist Anuradha Bhasin and others, already mandates the Centre and Jammu and Kashmir to review every week all the restrictions imposed since August 5 on communications and movement.

The bench of Justices N.V. Ramana, R. Subhash Reddy and B.R. Gavai passed Monday’s judgment while disposing of a batch of petitions moved by NGOs and individuals challenging the 4G ban.

The petitioners, who included the Foundation for Media Professionals, had said the ban was hurting education, health and other essential services, worsening the Covid-19 crisis. They had argued the restrictions were discriminatory as the rest of India enjoyed 4G connectivity.

The bench acknowledged “it might be desirable and convenient to have better Internet” amid a national lockdown. It also noted that the ban order “does not provide any reasons to reflect that all the districts of… Jammu and Kashmir require the imposition of such restrictions”.

But it added: “The fact that outside forces are trying to infiltrate the borders and destabilise the integrity of the nation, as well as cause incidents resulting in the death of innocent citizens and security forces every day, cannot be ignored.”

The review committee includes the Union communications secretary and the chief secretary of Jammu and Kashmir.

It will “examine the contentions of, and the material placed herein by, the petitioners as well as the Centre and states”, the court said.

It “must also examine the appropriateness of the alternatives suggested by the petitioners, regarding limiting the restrictions to those areas where it is necessary and the allowing of faster Internet (3G or 4G) on a trial basis over certain geographical areas and advise the Respondent No. 1 (J&K administration)”.

Earlier, attorney-general K.K. Venugopal and solicitor-general Tushar Mehta had told the court that 108 terrorist incidents had taken place in Jammu and Kashmir since August 5, of them 99 occurring in the Valley alone.

They said 30 civilians and more than 20 security personnel had been killed and 76 terrorists gunned down.

“These facts have not been rebutted by the petitioners. This court will have to consider the above in its analysis,” the court said.

It noted that the Jammu and Kashmir administration had reported “that the Pakistani military in its ‘Green Book 2020’ has called for an information warfare on Kashmir”, and that militancy and cyber terrorism were on the rise.

“National security concerns and human rights must be reasonably and defensibly adjusted with one another, in line with the constitutional principles,” the court said.

“There is no doubt that the present situation calls for a delicate balancing, looking to the peculiar circumstances prevailing in the Union Territory of Jammu and Kashmir.”