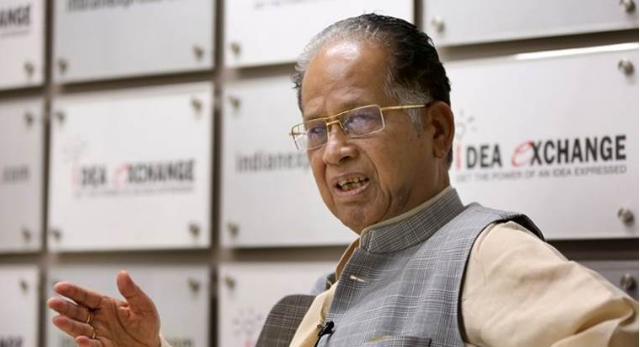 Assam currently has six detention centres to hold ‘illegal foreigners’, but these are all located inside jails. Together, they house 1,000-odd detainees.

Government sources said illegal Bangladeshi migrants convicted by Indian courts are a separate category from persons “declared” as ‘illegal foreigners’ by the 100 Foreigners’ Tribunals (FTs) of the state. (File)

Former Assam Chief Minister Tarun Gogoi on Friday said that he did not know why Prime Minister Narendra Modi has denied the existence of detention centres in India as they are needed to hold foreigners before deportation.

He also accepted that his government started detention centres in Assam, but added that they were created following a Gauhati High Court order.

Speaking to the media, the veteran Congress leader said, “I don’t know why the PM said there are no detention camps. Did he want to give the impression that we do not detain foreigners? Then where will you keep them? We have to keep them somewhere (before deportation) — he can’t be so ignorant. On the one hand, you want to give the impression that you are so liberal that you do not want to detain ‘illegal foreigners’ and on the other hand, expand the detention camps.”

Gogoi was referring to a December 22 speech by Modi in Delhi, in which the Prime Minister had said, “…No one is sending Muslims of this country to detention centres, nor is there any detention centre in India. This is a clear lie, it is a game with wrong intentions…”

On Friday, Gogoi said, “According to the PM there are no detention centres. But there are detention centres in Assam. We started (them) during our tenure as per the direction of the Gauhati HC in 2008. But now, this BJP government has also sanctioned around Rs 40 crore for the camp in Matia and the PM is saying there is no detention camp.”

He added that apart from the HC order, “detention camps were started because of a suggestion by then Vajpayee government in 1998. They had issued directions to all the state governments”.

The former CM defended the idea of detention camps. “Detention camps are necessary. After their (the foreigners’) completion of terms of imprisonment in jails, where will they be kept? Till they can be deported to the country from where they came, you have to keep them in a detention camp. Now, in Assam, I don’t see there is the need of detention camps since the Bangladesh government has agreed to accept the illegal immigrants… then why is there a detention camp?” Gogoi said.

Government sources said illegal Bangladeshi migrants convicted by Indian courts are a separate category from persons “declared” as ‘illegal foreigners’ by the 100 Foreigners’ Tribunals (FTs) of the state.

Coronavirus : A disaster or conspiracy by china or US??

Politics Vikas Gupta - April 5, 2020 0
Almost eight months after abrogating Article 370 in Jammu and Kashmir, the central government has redefined the domicile conditions for the Union...