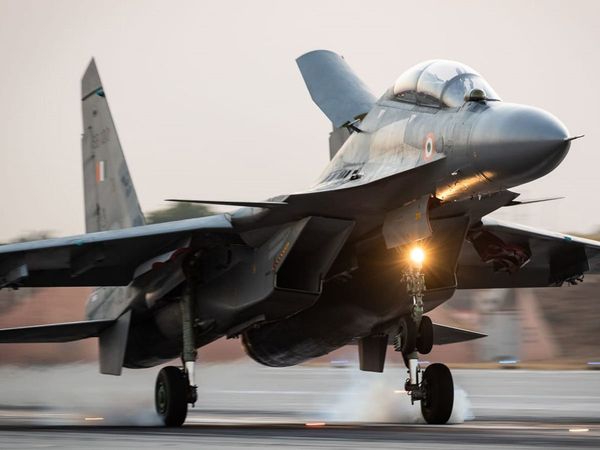 For days together, a similar WhatsApp message – “Tayare urh Gaye” (fighter jets have taken off)  – continued to pop up on mobile phone screen of Abdul Raouf Asghar, brother of Masood Azhar, one of the top Jaish-e-Mohammad (JeM) terror handler in Pakistan.

This minute by minute information was passed on to Asghar by Jaish chief, Masood Azhar’s nephew and top commander of it, Umar Farooq, who was active in Pulwama area of South Kashmir. Besides Umar, Qari Yasir and Ismail too were assigned the of gathering and passing on intel related to Indian Airforce (IAF) sorties.

Every time Indian fighter jets used to take off from Awantipora airbase in Pulwama, Umar Farooq and his companions, used to alert Asghar. The roaring sound of fighter aircraft over Pulwama skies was enough to help Umar and his men –  who were then hiding in a village in the vicinity of airbase – get an idea about IAF aircraft moment. This exercise of collecting and passing on information as part of Pakistan spy agency, Inter-Service Intelligence’s (ISI’s) mission to keep track of the movement of Indian fighter jets from a base in Kashmir.

Post Balakote strike, while Indian Airforce (IAF) fighter jets engaged in a dog fight with Pakistani bombers at their borders, Pakistani spy agency ISI asked Jaish-e-Mohammed (JeM) operatives in Kashmir to collect intel about the location of IAF bases and movement of Indian fighter jets. This chilling disclosure was made in charge-sheet on Pulwama suicide bombing, that was recently filed by the onal Investigative Agency (NIA) in special NIA court here in Jammu.

Forty CRPF personnel were martyred during Pulwama suicide bombing – one of the most brutal terror attack on Indian soil – that was orchestrated by Pakistan with the help of their proxy, Jaish. This attack triggered the IAF action against the terror camp deep inside Pakistani territory, 12 days later. During this airstrike, several Jaish terrorists were killed.

Rattled by Balakote airstrike, ISI instructed Jaish cadre operating in Kashmir valley to collect info about India’s airbase and sorties undertaken by fighter jets. Whatever information was collected by Jaish operatives was immediately passed on to PAF to alert them.

This chilling disclosure is made in 13,500-page charge-sheet named 19 people, including Jaish leader Masood Azhar and four of his relatives, for planning and carrying out the attack on a Central Reserve Police Force (CRPF) convoy at the behest of Pakistan. Of the 19, six are dead, three are absconding, and seven have been arrested. Azhar and his two brothers are believed to be in Pakistan.

Umar Farooq is the nephew of Jaish chief Masood Azhar – who was specially chosen for Pulwama bombing terror mission. Umar Farooq had received Rs 10 lakh in his bank account in Pakistan to execute the Pulwama bombing.

Umar Farooq, resident of 108/1260 BVI Kosar Colony in Bhawalpur, Pakistan was well trained in handling different types of sophisticated weaponry. In the year 2016 and 2017, he had undergone specialised training in fabricating explosive devices in Sangni terror training camp n Helmand province of Afghanistan. Here in this camp, mixed terror recruits from  Al Qaeda, Taliban, Jaish and Haqqani network are trained.

PAKISTAN RANGERS HQ IN SHAKARGARH IS LAUNCHPAD FOR TERRORISTS

Before infiltrating into the Indian side, Umar Farooq along with a group of three more terrorists stayed at Shakargarh launchpad, where Pakistani Rangers Headquarter is based. The day before infiltration, Umar Farooq and others did proper firing practice in an open area in Shakargarh. Idea was to prepare themselves to tackle any emergency-like situation if cornered by Indian security personnel.

On the intervening night of 13 and 14 February 2018, Umar Farooq infiltrated into Indian side through the international border (IB) in Samba sector of Jammu. During the process, he shot video of him cutting border fence to sneak in. This video clip is now part of NIA charge-sheet. Umar carried with him 20 kgs of RDX in a backpack that was bought in Pakistan. Besides this, he was also carrying M-4 and AK 47 rifle along with ammunition.

After entering Samba sector he moved towards the main bridge near Industrial area, where JeM’s overground workers, Ashiq Nengroo and Iqbal Rather were waiting, to take him to safer hideout in South Kashmir in a truck loaded with polyvinyl chloride (PVC). On Pakistan side, it was launch commander of Jaish, Abu Talha alias doctor sahib, who was coordinating between Umar Farooq and Nengroo,  till former boarded truck.

To checkmate security agencies, a special cavity was carved inside truck by placing PVC bags on all side to hide Umar Farooq.  Truck crossed several nakas  en route to reach Pulwama, without any one getting inkling about Umar Farooq presence.