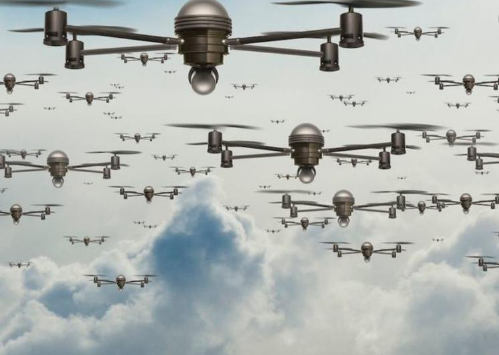 In almost any battlefield condition, swarms of such small independently maneuverable bombs can do the job of a tactical nuclear weapon. These weapons already exist and can be tested without being detected or without violating any treaty.

With Donald Trump’s North Korea denuclearization policy seen as a failure and his loyalty to allies seriously questioned, there’s talk that South Korea and Japan might go nuclear in self-defense. But in fact, nukes are obsolete. Swarms are the new deterrent that can actually be used.

Suppose Kim Jong Un, his hand on the nuclear button, is preparing to occupy Seoul. Do you threaten to blow up Pyongyang? Or do you unleash mosquitoes trained to bite him ceaselessly until he can no longer control his fingers? Imagine a missile a third the size of a telephone pole flying over a field of enemy tanks. A sensor flops open its belly and 60 independently targetable mines search out the tanks and destroy them. In almost any battlefield condition, swarms of such small independently maneuverable bombs can do the job of a tactical nuclear weapon.

These weapons already exist and can be tested without being detected or without violating any treaty. Next time you see Chinese drones in a synchronized light show, imagine how they might be used in anti-aircraft defense or anti-submarine warfare.

Swarms are surgical, produce less collateral damage and are not radioactive. Smart unmanned crawlers can breach the beach and destroy enemy infrastructure. So can malware, stealthily implanted. If you can bring the enemy’s economy to a standstill, you don’t need nukes.

The threshold of usage for swarms and malware are much, much lower than for nukes which could lead to mutually assured destruction, also known as MAD. So it is time to label the nuke a dirty 20th-century deterrent. It is as mindless as a suicide vest.

Talking about nukes today is like repeating the London Naval Conference of 1930 which limited the tonnage of battleships – right when battleships were becoming obsolete.

Recall that the German battleship Tirpitz hid in a Norwegian fjord during World War II, as did the Yamato in the Inland Sea until it went on a suicide mission to Okinawa. Those ships lost their days to swarms of carrier-borne planes – and now the unusable dumb sledgehammer that is a nuke is being replaced by swarms of little robots and malware implants.

Kim’s reliance on nukes and missiles will fail – without fail. Nukes and missiles have limited shelf lives. Submarines and submarine-launched ballistic missiles are expensive and their parts must be replaced constantly. Spending 20% to 24% of a country’s GDP on defense is simply unsustainable. Economically that is equivalent to a nation building hundreds of bridges to nowhere every year.

The Soviet Union played that game and lost. Russia’s economy is now smaller than Italy’s. Although Vladimir Putin boasts of a slick new super-fast missile, basically Russia is now reduced to relying on polonium pellets and nerve killers carried in perfume bottles.

Back to North Korea: It takes time, but maximum pressure works. It works because it narrows the margin of error for a regime and when you are vastly overspending on defense, it is simply a matter of time. The time factor is especially critical when there is no guarantee of legitimacy for the family business.

South Korean President Moon Jae-in is not the only one thinking about the post-US landscape. Everyone is. Whether Trump wins a second term or not, every nation – think Australia, Germany, Japan, Poland, Taiwan, the UK – is now rethinking its relationship with the US. If Trump could happen once, “it” could happen again.

But we could say the same thing about China or Russia or India. If and when Beijing can no longer exchange income growth for political silence – and that is always a matter of when, not if – what will be the consequences? Will people look back to Hong Kong today and Tiananmen Square yesterday or – totally unthinkable at this point, yes, but – could they be inspired by the Uighur resistance movement?

Restore and keep up maximum pressure on Kim. Those who say it does not work should read about the bitterly cold December of 1991, when Moscow sought out US aid in the form of unused rations from the Gulf War. (The USSR lasted from Dec. 1922 to Dec. 1991 or 69 years; that is less than this writer’s age.)

Let North Korea spend over 20% of its GDP on figurative bridges to nowhere. Narrow its margin of error to a razor’s edge, and let it make mistakes. But make sure the children are fed.