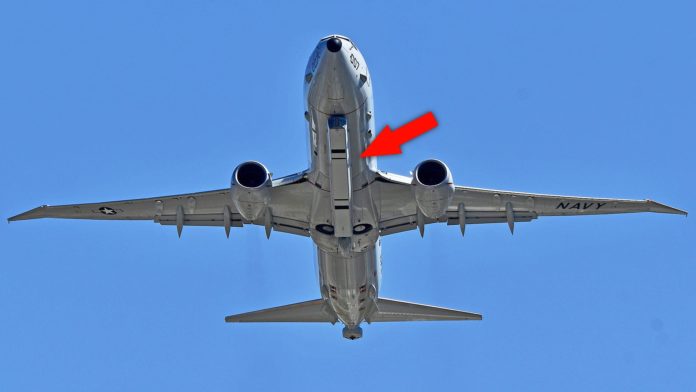 One of the U.S. Navy’s P-8A Poseidon maritime patrol planes recently visited Moffett Field in California. The aircraft in question was carrying an elongated pontoon-like pod underneath, known as the AN/APS-154 Advanced Airborne Sensor, or AAS, a powerful and secretive radar system.

A planespotter, photographer, and War Zone reader named Fred, who also goes by the Twitter handle cvvhrn, took the pictures of this particular P-8A, which is also known by the Bureau Number 169007, at Moffett on May 3, 2020. He was kind enough to share them with us so we could share them with you.

The pictures offer an excellent view of the underside of the AN/APS-154, as well as the P-8A carrying it. The pod is attached to the bottom of the aircraft using a special, extendable cradle known as the Special Mission Pod Deployment Mechanism (SMPDM), which Aviation Week was first to report on in July 2019. By extending the pod well below the fuselage while in flight, the radar’s fields of view are no longer obstructed by the plane’s two engines.

You can also see a pair of vertical strakes, one on either side of the bottom of the P-8A’s rear fuselage. These are unique to aircraft that have been configured to carry the AN/APS-154.

Specific details about the pod itself and the capabilities of the radar inside, all of which Raytheon developed almost entirely in secret, are limited. The radar is known to be an active electronically-scanned array (AESA) type with moving target indicator (MTI) and synthetic aperture functionality. What this means is that the system is capable of tracking moving targets below at sea and on land, as well as taking high-quality radar imagery of objects of interest for further analysis, even at night or in poor weather.

The AAS is also specifically designed to work in littoral regions where it might have to scan both water and land areas simultaneously. Traditional surface search radars are typically optimized for one environment or the other, or have dedicate modes for each, and generally have difficulty covering both at the same time.

All of this makes it a powerful information-gathering tool for the P-8A, which is set to not only replace the Navy’s P-3C Orion patrol planes, but also partially assume the missions of its specialized intelligence variants of that aircraft, such as the EP-3E Aeries II. The AN/APS-154 is itself a direct follow-on to the equally secretive AN/APS-149 Littoral Surveillance Radar System, another podded Raytheon AESA radar that some P-3Cs carry. The AAS is also just one bolt-on sensor suite that is in development for the Poseidon, as well.

In addition, the AN/APS-154, combined with the P-8A’s networking and data-sharing capabilities, will enable planes carrying the pod to be powerful stand-off targeting platforms for other assets in the air, at sea, or on land, as well as its itself. The Navy is now working to integrate various stand-off weapons onto its Poseidons, which you can read about more in this past War Zone piece. The AAS would also allow the aircraft to conduct rapid assessments of any strikes.

Beyond that, being an AESA type radar, the AN/APS-154 might have secondary electronic warfare capabilities. You can read much more about this sensor and what it offers to the Navy’s Poseidon fleet here.

It’s not clear how many AAS pods the Navy has now, how many of its P-8As are configured to carry them, or what units those aircraft are assigned to. The Navy first contracted Raytheon to develop the radar system in 2009 and began testing it in 2014. As of August 2019, at least seven different Posiedons, including this particular aircraft, have been observed carrying the pods at various times. Some of these aircraft have been linked to some of the Navy’s most shadowy aviation units, which is the topic of a War Zone feature that will be coming in the near future.

There have been more sightings of AAS-equipped P-8As in the last year or so, which along with the appearance of 169007 at Moffett Field, indicate that the Navy’s is making increasingly regular use of these powerful sensors.