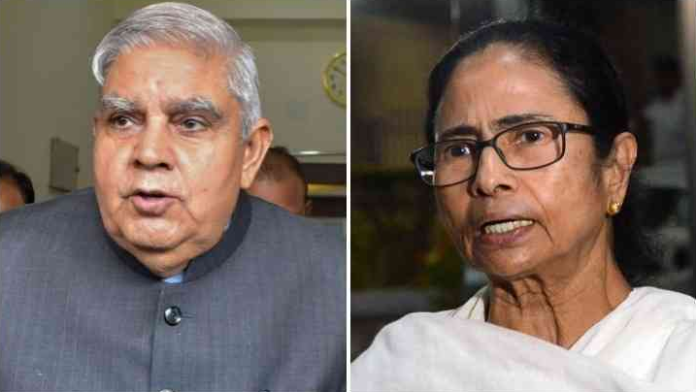 Speaking at a rally in the city on Thursday afternoon, Mamata Banjerjee challenged the Narendra Modi government at the Centre to go for a United Nation-monitored referendum on the Act and NRC.

West Bengal Chief Minister Mamata Banerjee said in a Trinamool Congress rally that after many years of independence why we need to prove citizenship. Mamta Banerjee has demanded that a referendum should be held on the Citizenship Amendment Act and NRC and It should be monitored by United Nations(UN).

Kolkata: West Bengal Governor Jagdeep Dhankhar on Thursday appealed to Chief Minister Mamata Banerjee to withdraw her statement challenging the BJP-led government at the Centre to go for a UN-monitored referendum on Citizenship Amendment Act (CAA) and the proposed NRC.

Dhankhar took to the Twitter and said that as a citizen of the country he was “distressed, pained and hurt” at Banerjee’s statement and hoped that the chief minister would “definitely pay heed” to his request as nobody should “compromise our nationalism”.

West bengal Governor asked her to act as per her oath and regretfully withdraw her statement.

“We must never compromise our Nationalism. NATION HAS ALWAYS TO BE FIRST. Am sure CM Mamata Bannerjee will heed my humble request and withdraw forthwith her reported statement. Am distressed, pained and hurt as citizen of this great Nation at such a statement,” he said in another tweet later.

She had also said that BJP will have to quit if it fails in the “mass vote”.

The Trinamool Congress supremo, a strident critic of the saffron party, alleged that the BJP was trying to brand protests against CAA as a fight between Hindus and Muslims in the country.

“Just because BJP has got the majority it does not mean that they can do whatever they want. If it has guts, it should go for a United Nations-monitored referendum on the Citizenship Amendment Act and the NRC,” Banerjee said.

Dhankhar, who has often been at loggerheads with the TMC government in the state on various issues, has been urging people to stop protesting against the new citizenship law as the Supreme Court has refused to stay its operation.

The apex court had on Wednesday decided to examine the constitutional validity of the Act but refused to stay its operation.

Committee Formed To Consider Restoration Of 4G Internet In Jammu And...