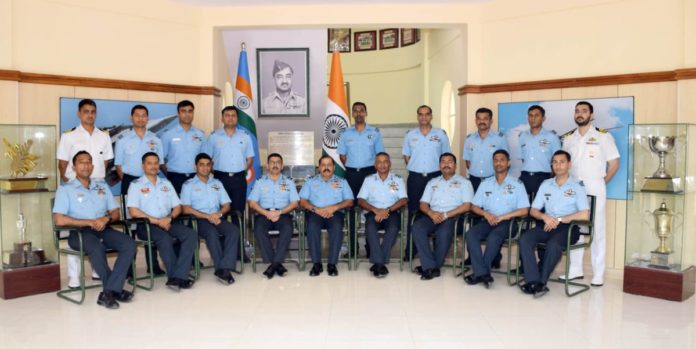 AFTPS is integral to the Aircraft and Systems Testing Establishment (ASTE), one of the premier units of the Indian Air Force (IAF).
Speaking on the occasion, Chief Guest Air Marshal AS Butola, Air Officer Commanding in Chief, Training Command, told the graduating officers that they would play a crucial role in capability building and modernization of the Indian Armed Forces (IAF). Despite resource constraints, it was incumbent on the test crew to continually strive to ensure that the developmental and testing cycle time was reduced without compromising on safety and quality.
He emphasised on the need to be committed to ensure that the systems cleared for induction met the operational requirements so that they were inducted within the shortest possible time, with optimum utilization of resources. He highlighted that India could witness a major manufacturing boost, as a consequence of the ‘Make in India’ campaign. The test crew, with their specialist training and experience, would play a crucial role in fructifying and sustaining such an endeavour. He urged the graduating officers to uphold the virtues of honesty and integrity along with professional attributes of precision and excellence as they stepped out into the real world from the relative comforts of an academic environment.

The passing-out officers will join the prestigious and elite club of ‘the few and the proud’, comprising 297 Test Pilots and 135 Flight Test Engineers that have passed out from AFTPS since its inception in 1973.

AFTPS features among the handful of test pilot schools in the world that produce Test Pilots and Flight Test Engineers who subsequently distinguish themselves in various Test Programmes. For instance, indigenous aircraft such as Light Combat Aircraft, Advanced Light Helicopter of Hindustan Aeronautics Limited, and Airborne Early Warning & Control of Defence Research and Development Organisation were first flown by the test crew trained here.

The first Indian in space, Wing Commander Rakesh Sharma Ashok Chakra (Retired), is an alumnus of AFTPS as well. Recently, four Test Pilots, all alumni of AFTPS, were selected to undergo training in Russia for the Gaganyaan programme. Till date, 297 Test Pilots and 135 Flight Test Engineers have graduated from this institute.

“Ladakh is a lakshman rekha, the Chinese must not be allowed to cross it” – Defence News of India

No participants from J&K allowed in Pakistan-backed anti-India webinar in UK – Defence News...

Defence News Vikas Gupta - June 5, 2020 0
SOURCE: IBMSIn what could be described as a one sided affair, a Pakistan-backed anti-India webinar was called by Kashmiri separatists based in the...

No participants from J&K allowed in Pakistan-backed anti-India webinar in UK...