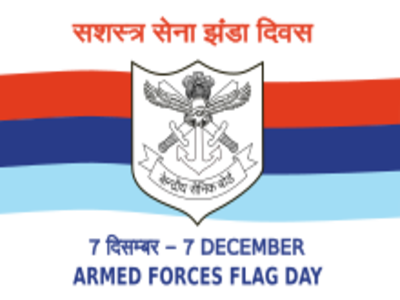 Right after India achieved Independence in 1947, Government wanted to look after its defence personnel. Keeping that in consideration, a committee was set up on August 28,1949 under the chairmanship of Defence Minister and this committee decided to observe December 7 as the annual Flag Day. The Idea behind Flag Day was to distribute small sized Armed Forces Flag and collect funds in return. Over the years, Armed Forces Flag Day got momentum as Indian civilian population started realizing that it is their duty to take care of the families and dependents of the soldiers who fight for the country.

The Donation amount is growing every year as the Politicians and Celebrities also started promoting Armed Forces Flag day fund through social Media. Civilian population is getting more aware of it due to the presence of internet and social media. Armed Forces Flag Day Fund is exempted from Income Tax. Last year the fund collected was INR 19,32,00,000 which was distributed among 8870 Beneficiaries as follows:

Contributions from public are received throughout the year. One can either contribute through cheque or online payment or direct deposit to the bank. If you want to pay through cheque then it would be payable to “Armed Forces Flag Day Fund” C/o Secretary, Kendriya Sainik Board, Ministry of Defence, West Block IV, Wing-VII, 2nd Floor, RK Puram, New Delhi – 110066.

If you want to deposit the amount directly in the bank account then it should go under the following details:

If you want to Pay online through cards or using net banking, you can visit KSB Secretariat.

To encourage Digital India, This year Kendriya Sainik Board has added few more online mediums to contribute such as Paytm and UPI. Below are the details:

Besides these, there were many Politicians, Celebrities and Sports-persons who reacted and promoted Armed Forces Flag Day.

Got Queries? Ask with #ArmedForcesFlagDay