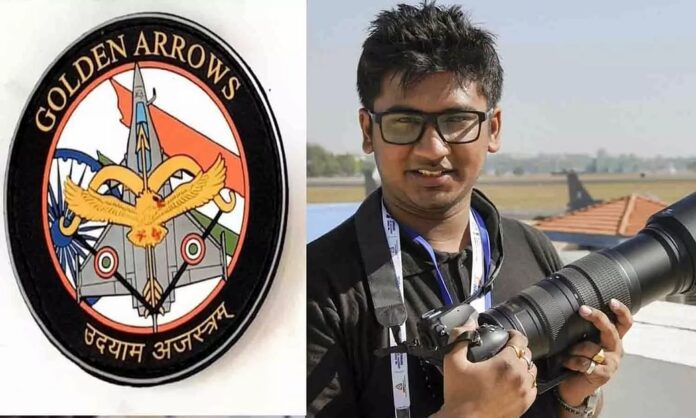 Assam youth and 3D artist Saurav Chordia, 22, has finally fulfilled his long-cherished dream of flying high with the Indian Air Force (IAF) – not literally but with creative art – by designing the two patches that adorned the Gsuits of IAF pilots before they took off for India from France with Rafale fighter aircraft.

Stills tweeted by the Indian embassy in France showed the patches on IAF pilots’ Gsuits while they were interacting with Indian ambassador Jawed Ashraf before their departure. The patches were delivered to the Ambala-based No. 17 Squadron, the ‘Golden Arrows,’ earlier.
Saurav had to work tirelessly for one week to finalise the patches. “I was very happy and feeling proud as well. … The patches designed for the first Rafale unit was really special as the entire country is looking after the lethal Rafale aircraft which will be landing tomorrow,” said an emotional Saurav, while talking to TOI from Basugaon town in Chirang district on Tuesday.

‘Designing the patches was challenging’He added, “The challenge of designing the patches for the pilots of the Rafale jets was immense as I had to highlight the old sanity of the No. 17 squadron, the ‘Golden Arrows’. The Himalayan eagle, the motto of the squadron, and the tricolour in one patch, and the symbol of the aircraft and squadron logo i.e bow and arrow had to be crafted with perfection.” Saurav had to work tirelessly for one week to finalize the patches.

A big-time aviation buff, the passion for contributing towards the air warriors led Saurav to get into things like patch designing, aviation art and aviation photography. His ambition was to build fighter aircraft models but he could not achieve the goal as he came from a non-technical background and due to his health condition. He wanted to be in the Air Force but could not pursue that due to his weak eyesight.
Saurav did not lose hope and started working in a 3D gaming company in New Delhi after completing his graduation in political science from a Noida university. His wanted to contribute “something remarkable” to the IAF.

Saurav wanted to join the Air Force anyhow and started designing aircraft models in 3D after matriculation. His passion and studies were never familiar and ultimately, when it came to livelihood, Saurav decided to choose passion.”I used to make 3D models of aircraft on my computer and I continued to do so till my college. Finally, I got a job as well in a gaming company where my job is to make 3D models. My aviation art and design were noticed by one unit in the IAF when I was in college second-year. They asked me to make patch design for them and they liked it a lot. Since then, I have designed various types of patches,” Saurav added.