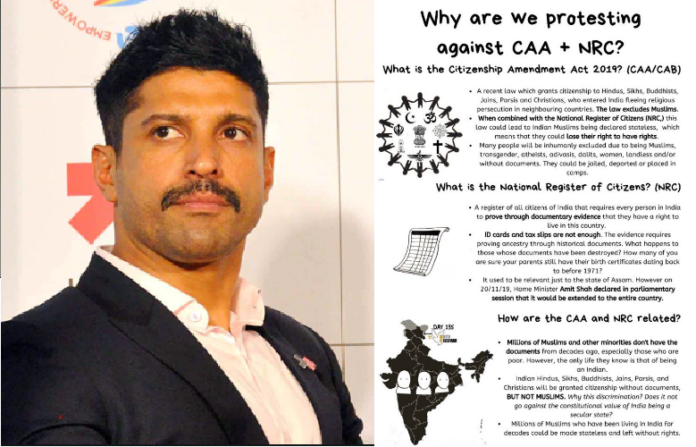 Bollywood Star Farhan Akhtar shared a photo about NRC (National Register of Citizens) and CAB (Citizen Amendment Bill) on twitter where he propagated the Pakistani ISI made propaganda with False information.

Farhan Akhtar tweeted, ” Here’s what you need to know about why these protests are important. See you on the 19th at August Kranti Maidan, Mumbai. The time to protest on social media alone is over.”

What is Wrong in this photo?

How is it Pakistani ISI’s propaganda ?

The Photo which was shared by Farhan Akhtar, is made by Pakistani sponsored ISI page “Stand With Kashmir” as you can see the logo of “Stand with Kashmir” with “Day 135” in the photo.

“Stand With Kashmir” is the same group which organises anti-India protest in foreign countries with the help of Pakistani intelligence agency ISI but now the same group is going to organise protest against India on Indian soil against Citizenship Amendment Bill(CAB) and National Register of Citizens(NRC).

This page is mainly run by five people who are living in United states and Canada. four admins of this page live in USA and one Admin of this page lives in Canada and some other pages are run from Pakistan too.

Post of “Stand With Kashmir” where it thanked Pakistan Prime Minister Imran Khan for his speech at United Nation against India.

What is Propaganda in this Photo?

All the wrong facts are written in the photo which was shared by Farhan Akhtar. Here you can see the corrected facts of that picture.

Wrong India’s Map in this photo also proves that It is Pakistani made propaganda because Pakistan uses the same map for India. In this map, PoK and Aksai Chin are excluded.

Later Farhan Akhtar said sorry for using wrong Map of India but didn’t said anything about ISI propaganda about this post.