If, as seems likely, NATO agrees to their request, it will be the largest and most far-reaching expansion of the Atlantic Alliance in two decades, adding more than 800 miles to Russia’s northern border and significantly complicating its safety calculation.

It is also an indicator of the evolution of opinion in Europe against Russia since it invaded Ukraine. The Finnish parliament approved the proposed NATO membership by a majority of 188 votes to eight; and Sweden, which has been isolationist for the past two centuries, now also supports NATO membership.

The admission of Finland and Sweden to NATO, however, must be approved by the North Atlantic Council. Turkey has already signaled its opposition to Sweden granting asylum to Kurdish refugees. Italy, Greece and Spain are also ambivalent about NATO enlargement.

NATO was created with the signing of the North Atlantic Treaty in Washington on April 4, 1949 by 12 Western European and American countries, including the United States, United Kingdom, Germany and Canada, to provide collective security against the resurgence of the Soviet Union and to combat the spread of communism. NATO was the first peacetime military alliance the United States entered into outside of the Western Hemisphere.

At the broader strategic level, NATO was meant to serve three purposes: to deter Soviet expansionism; counter the revival of nationalist militarism in Europe through a strong North American presence on the continent; and encourage European political integration.

Article 3 of the treaty called on signatories to “maintain and develop their individual and collective capacity to resist armed attack”. Article 5, arguably the most consequential clause, stated that “the Parties agree that an armed attack against one or more of them in Europe or America shall be considered an attack against them all”, and in a In such a case, each of them would exercise the right of individual or collective self-defence.

Article 9 initiated the Alliance staffing process by creating the North Atlantic Council (NAC) and directing it to “create the necessary subsidiary bodies; in particular, it immediately establishes a defense committee which recommends measures for the application of Articles 3 and 5.” 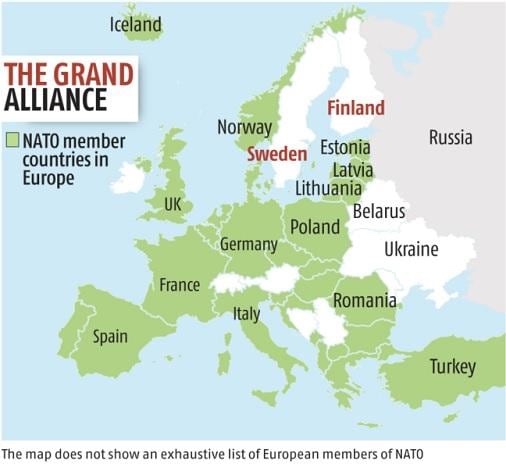 As NATO set out to develop an overall strategy for the Alliance, a key question loomed over the use of nuclear weapons to defend the North Atlantic region. Most Western military planners believed that NATO was vastly inferior in conventional military strength to the Soviet Union and its Eastern European satellites. who joined hands to form the Warsaw Pact.

The “trigger force” was a small American military contingent stationed in Europe to demonstrate American commitment to endangering its troops by militarily countering a massive attack by the Soviet Union.,

If attacked, the “trigger force” would slow the Soviet advance long enough to allow the United States time to mobilize additional resources. Since the “trigger force” is too small to present an offensive threat, it can be deployed without triggering a “security dilemma” – a political science concept in which actions a state takes to increase its own security cause other states to react in a way that diminishes, rather than increases, the security of the home state.

Until Russia’s annexation of Crimea in 2014, there were only a few thousand NATO troops in Europe, deployed as a “trigger force”. Since then, their numbers have swelled to tens of thousands as relations have deteriorated significantly. The 2014 NATO summit in Wales returned the group to its Cold War role of territorial defence.

Today, NATO’s military presence has been greatly reinforced. According to Economist, the NATO High Readiness Response Force was tripled to 40,000 troops and provided with more armaments. This was reinforced by another rapid reaction force, the Very High Readiness Joint Task Force, whose 5,000 ground troops, supported by air, sea and special forces, can be deployed within 48 hours.

Additionally, NATO has agreed to deploy four multinational battalions – each with around 1,000 troops and commanded by the US, UK, Germany and Canada – in the three Baltic states and Poland.

Washington has promised to increase funding for the Pentagon’s European Reinsurance Initiative to $3.4 billion next year. This quadruple expansion will be devoted to increasing US forces and heavy weapons in the region.