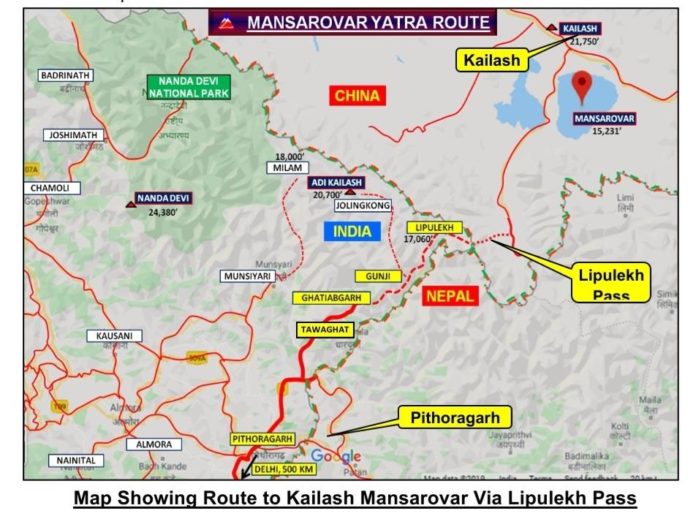 In a strategically vital development India has completed its first road connectivity to the Line of Actual Control (LAC) with China in Uttarakhand, paving the way a smooth ride for pilgrims headed to the holy Kailash Mansarovar and also for troops deployed there.

A road to the 17,000 feet high Lipulekh pass has been completed, the holy Mount Kailash is located some 97 km north of the pass in Tibet. Connectivity of the 80 km of Ghatiabgarh-Lipulekh was achieved by the Border Road Organisation (BRO) on April 17, some trials followed and on Friday morning Defence Minister Rajnath Singh opened the road by video conferencing. Lipulekh pass close to the Tri-junction of India-China-Nepal, is the lowest point in this section of the high Himalayas.

The 80 km, which now has a road, entailed more than a three-day trek one-way for pilgrims and also for the security forces posted there. The road completion means it will now be two-day travel distance from Delhi to Lipulekh, a distance of 750 km via Pithoragarh. In all it will reduce some six days from the Kailash-Mansarovar yatra. Beyond, Lipulekh, the 97 km road in Tibet to Mount Tibet already exists.

The road on the Indian side, for now, has been completed just 5 km short of Lipulekh. Sources said the Director General Military Operations had placed a temporary ban on last-mile connectivity. Once that is okayed, the BRO expects to complete the last five km by the end of the year.

The entire route from Delhi to Kailash Mansarovar, other than 5km, will be on vehicles. A yatri from Delhi can go to Pithoragarh and from there on the night halt at Gunji for first acclimatization and second near Lipulekh Pass for second stage acclimatization, needed due to altitude and rarefied air in tree-less Tibet.

The other route for the yatra is via Sikkim is 2780 km. It involves taking a flight to Bagdogra (1115 km from Delhi), thereafter 1665 km of road travel, including 1490 km road travel in China.

The 80 km Ghatiabgarh-Lipulekh section is made under the directions of the China Study Group (CSG) and is funded from Indo-China Border Road (ICBR). The road was approved by the Cabinet Committee on Security (CCS) in 2005 at a cost of Rs 80.76 crore. In 2018, CCS approved a revised cost of Rs 439.40 crore.

The progress in last two years was possible due to addition of construction equipment — 90 pieces of equipments were deployed on the road.