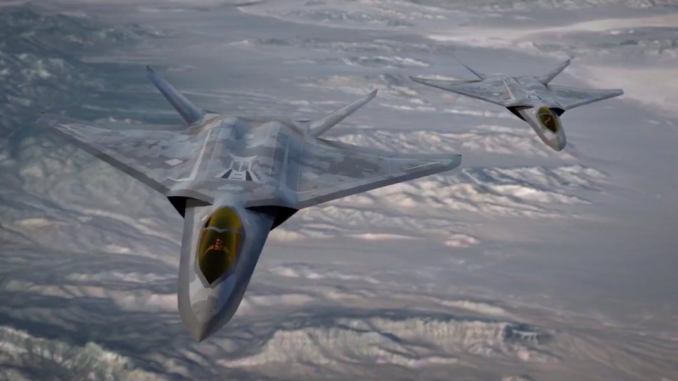 The U.S. Air Force’s disclosure that it has secretly built and flown a prototype fighter jet could signal a shift in how the military buys weapons and who builds them. Will Roper, the head of Air Force acquisition, revealed the existence of the new jet, which he said was part of the service’s Next Generation Air Dominance, or NGAD, project.

“NGAD right now is designing, assembling, testing in the digital world, exploring things that would have cost time and money to wait for physical world results,” Roper said during a video presentation at the Air Force Association’s Virtual Air, Space & Cyber Conference on Tuesday. “NGAD has come so far that the full-scale flight demonstrator has already flown in the physical world. It’s broken a lot of records in the doing.”

Roper provided no more details about the jet, which is presumed to be the Pentagon’s first attempt to build a “sixth-generation” tactical aircraft after the fifth-gen F-22 and F-35 jets. He even declined to name the company or companies that built the jet.

But he said the digital design technology used to build the new plane could increase competition and increase the number of American military jet makers.

“Digital engineering is lowering overhead for production and assembly [so] you do not have to have huge facilities, huge workforces [and] expensive tooling,” Roper said on a video conference call with reporters after his presentation. “It is letting us take aircraft assembly back to where we were in the [19]70s and prior to it — back when we had 10 or more companies who could build airplanes for the United States Air Force, because you could do it in hangar-like facilities with small, but very good teams, of engineers and mechanics. We’re going back to that. It’s super exciting.”

Lockheed Martin and Boeing are the only two U.S. companies that currently build fighter jets.

Another reason for disclosing the NGAD project: Roper wants companies to invest more in digital design technology. In recent years, the Pentagon writ large has been trying to tap into innovation, particularly commercial technology, that could be adopted for the military.

The Air Force in July revealed that it received 18 bids for a new drone that could fly in formation with manned fighter jets. While Boeing, Northrop Grumman and General Atomics won contracts, much smaller Kratos, which has been the subject of acquisition speculation, also received a contract.

“We’re…surprised there were 18 bidders,” Cowen & Company analyst Roman Schweizer, wrote in a July 24 note to investors. “Having five competitors for a decent-sized program is pretty solid, in our opinion, particularly when you consider three or fewer is the norm for most platforms, weapons or systems.”

Roper declined to give many additional details about the NGAD project because it is classified. But he said part of the reasoning for disclosing the existence of a test aircraft was to prove to naysayers that combat aircraft could be fully designed and tested on computers before they’re physically built, much like the way Boeing and Saab built the T-7 pilot training jet in recent years.

“I’ve had many people in the Pentagon and elsewhere, say, ‘I see how you could apply that approach to a trainer like T-7, but you could not build a cutting-?oref=d1-in-articleedge warfighting system that way,’” Roper said. “I’ve had to listen to that and just nod my head and say, ‘Well, you may be right,’ knowing in the back of my head that you’re actually wrong because of what NGAD has done.”

In addition to the NGAD and the T-7, Northrop Grumman is using digital design and testing in building new intercontinental ballistic missiles and it’s also being used on two new satellite projects, Roper said.

“My hope is to create greater credibility and the process, at least within my my own team for many who are not read in to NGAD, so that they will know to get smart on this technology because we’re going to train on it, we’re going to drill on it until this is the way we do business,” he said.