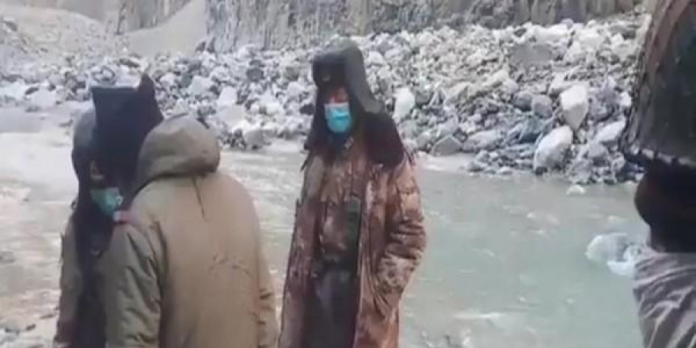 As the water-flow has increased in the Galwan river, the Indian Security forces are now feeling the need for specialised waterproof clothing for the troops deployed there in a standoff position with China. The Chinese side seems to have come prepared for the deployment as their troops deployed in the Galwan river valley bed are wearing water-proof clothes which allows them to step in the icy water there.

“There is a need felt for specialised clothing for deployment alongside the river with ice-cold water as the water flow has increased in the river with the rise in temperature,” sources told ANI. The Chinese side which has made camps all along the Galwan river valley up to near the Indian Patrolling Point 14 has come with specialised clothing where the lower portion of the combat dress is made up of waterproof material which allows them to step into the water, the sources said.

The Galwan river after originating from Aksai Chin passes through the Line of Actual Control (LAC) and merged with the Shyok river near Indian PP-14.

Earlier also while patrolling the area from KM-120 post to the PP-14, Indian security men had to step inside the river water which would wet their shoes, they said.

Sources said the special clothing with Chinese could have helped them in avoiding a higher number of hypothermia casualties during the Galwan valley clash on June 15 with Indian soldiers.

The Indian side is also preparing itself for the possible long term deployment in the Galwan valley and other areas where the Chinese have deployed heavily along the LAC.

All along the LAC from the Ladakh sector to Arunachal Pradesh, the Chinese Army has done heavy deployments and not showing any signs of thinning down despite holding talks at multiple levels with the Indian agencies.

The Chinese buildup had started around May 4 almost two months ago when they marched along the LAC to multiple points including the Finger area, Galwan valley, DBO sector, PP-15, Hot Springs and Ghoghra.

The Chinese have also been fortifying their positions and troops’ strength in areas where they have come and it is being perceived that they are using the time in talks for building up further.