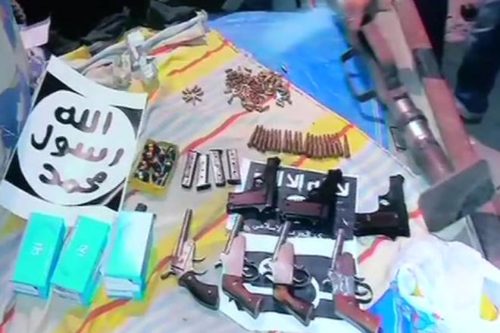 NIA received information earlier this month about a group of pro-ISIS individuals who have formed a terrorist group and are planning to carry out terrorist attacks targeting Politicians, Government installations, sensitive locations and crowded places in and around Delhi/NCR. The mastermind of the module is identified as Mufti Mohd. Suhail Hazrath s/o Hafiz Ahmad, native of Amroha, UP. NIA registered a case on December 20, 2018 and investigation was taken up forthwith.

Terror group managed to procure weapons, ammunition and explosive material to prepare IED’s and bombs. They planned to carry out explosions and fidayeen attacks at different crowded places in Delhi/NCR. NIA conducted raids at 6 places in Jafrabad, Seelampur, Delhi and 11 places in Uttar Pradesh(6 in Amroha, 2 in Lucknow, 2 in Hapur, 1 in Meerut). The seized items include:

Details of Persons arrested by NIA

NIA detained 5 people from Amroha, UP and other 5 people from different places of Delhi and Uttar Pradesh. The group was formed around 4-5 months back. Among the arrests, Mufti Mohd. Sohail is the mastermind. He was in touch with a foreign mastermind whose identity is still unknown. List of people arrested are:

The arrested accused were produced before the NIA Special Court, Patiala Court House, New Delhi on Thursday, December 27, 2018. The court ordered 12 days remand for the 10 suspects arrested by NIA.

Got Queries? Ask with #NIAraid