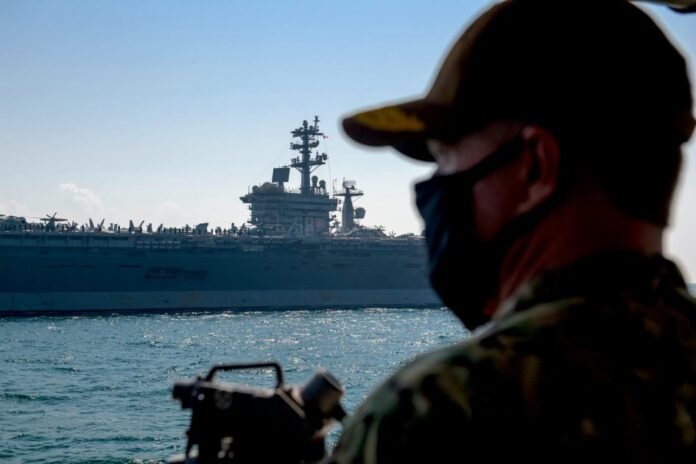 USS Nimitz (CVN-68) is heading to the annual Malabar exercise to drill with an Indian aircraft carrier after spending nearly two months in the Persian Gulf. A Navy spokesperson confirmed to USNI News on Monday that Nimitz is still operating within the U.S. 5th Fleet area of responsibility in the Gulf of Oman, but is sailing to the Indian-led naval exercise.

Nimitz and India’s Kiev-class carrier Vikramaditya will partake in drills for Malabar 2020 between Nov. 17 and 20 near the Goa coast, The Hindustan Times reported over the weekend.

Nimitz, along with its embarked Carrier Air Wing (CVW) 17 and USS Princeton (CG-59), stopped in Bahrain for a port call from Nov. 4 through 8, the Navy said in a news release.

The port visit came as Nimitz had been operating in the Persian Gulf for almost two months, the longest amount of time a U.S. aircraft carrier has spent in the waters since 2018. USS Theodore Roosevelt (CVN-71) had operated in the Gulf from December of 2017 until late March of 2018 as part of the U.S. anti-ISIS effort Operation Inherent Resolve.

“The sailors and Marines of Nimitz Strike Group remain steadfast in their commitment to the free flow of commerce, freedom of navigation, and our regional maritime partnerships,” Rear Adm. Jim Kirk, who commands the Nimitz Carrier Strike Group, said in a statement. “We are grateful for the support from the Kingdom of Bahrain for our port call.”

The Royal Australian Navy for the first time in more than a decade is participating in the yearly Malabar Exercise, USNI News previously reported. The drills, which kicked off last week, feature India, the U.S., Japan and Australia — an alliance known as “the Quad” that is viewed as a hedge against Chinese aggression.

U.S. Indo-Pacific Command commander Adm. Phil Davidson said last month that the alliance of the four nations can serve as both an economic and diplomatic safeguard against China.

“What those four countries can bring to bear in diplomacy, in economic power, in the sharing of values that underline all the free and open Indo-Pacific visions that each nation has put forward, which are well overlapping, as I mentioned earlier, that’s a great convergence. That’ll actually be the most powerful aspect of it,” Davidson said.