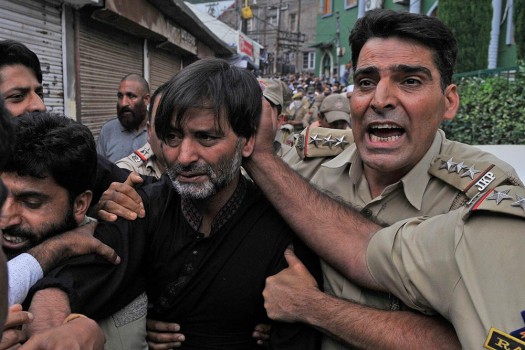 Yasin Malik’s organisation Jammu Kashmir Liberation Front (JKLF) was banned by Modi Government on Friday, March 22, 2019. This decision was taken by the security committee of the cabinet headed by PM Narendra Modi. Officials said that JKLF is banned for promoting secession of the state from the Union of India. JKLF is in close touch with militant outfits and is supporting extremism and militancy in Jammu & Kashmir.

JKLF is banned under section 3(1) of the UAPA, 1967. According to this section, Centre can declare any association as unlawful by notifying it in the Official Gazette. Centre also banned Jamat-e-Islami (JeI-J&K) earlier this month under the same section.

Yasin Malik is already in a jail booked under the Public Safety Act after the Pulwama terror attack that killed 40 CRPF personnel. Malik is likely to face trials for a 3 decade old case. He abducted Dr. Rubaiya Sayeed, the daughter of then Union home minister Mufti Mohammad Sayeed. He also gunned down 4 Indian Air Force personnel in Srinagar.

Home Secretary Rajiv Gauba told Media that Yasin Malik was the mastermind behind the purging of Kashmiri Pandits and is responsible for their genocide. He also said that JKLF is a threat to the security of the country. CBI has registered 2 cases against JKLF including the murder of 4 IAF personnel. NIA has also registered a case and it is under investigation.

Got Queries? Ask with #JKLF & #YasinMalik